"The [harassment] and its style are no less than that of [the Nazi propaganda newspaper] Der Sturmer.…The decision of those [haredim] who choose to join the army is not easy." 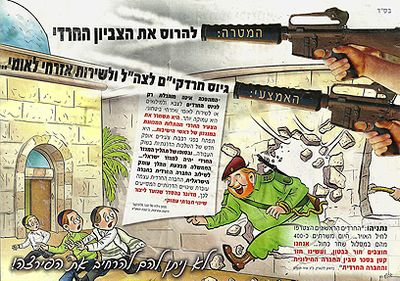 During a public meeting of the Knesset's Foreign Affairs and Defense Committee today, committee members were told that since the Peri Committee began meeting to plan how to draft haredi yeshiva students, haredi soldiers in the IDF have been shunned, harassed and physically attacked by haredim who do not serve in the IDF.

Along with vicious propaganda against them created and widely distributed by haredim, haredi soldiers have been thrown out of haredi synagogues, harassed and attacked in haredi neighborhoods and shunned. Haredi soldiers have even been stoned by fellow haredim in Mea Shearim and in other haredi areas of the country.

Brigadier-General Gadi Agmon, head of planning in the IDF's Personnel Directorate, compared the treatment of haredi soldiers by their fellow non-soldier haredim in stark terms.

"The phenomenon and its style are no less than that of [the Nazi propaganda newspaper] Der Sturmer," Brigadier-General Gadi Agmon told the committee, Ynet reported.

Agmon also reportedly noted that, despite all that harassment and violence directed at haredi soldiers, a new IDF recruitment center for haredim has been opened.

Update 5:45 pm CDT – Ynet has added more information to its original story, including the following:

Agmon: "We have not received the full extent of reports yet, but we received some 80 reports from Rehovot, Beit Shemesh, Beitar, Jerusalem, Bnei Brak, and more."

Agmon on the banning and eviction of haredi soldiers from haredi Yeshivas: "We have seen this as a marginal issue in the past [but it is not marginal now]. The decision of those [haredim] who choose to join the army is not easy."

Labor Member of Knesset Merav Michaeli asked police representatives increase security for haredi soldiers: "The discussion should revolve around the harm to individuals. The ones who are hurt are individual soldiers. It doesn't matter how they call it – price tag, women of the wall, haredi recruits, the pattern stays the same. The police need to understand this is political attack. There are entire sectors that feel free to hurt others. The police need to better deal with this. For example, I cannot understand why they don't patrol the streets to which haredi soldiers come home to."

Posted at 10:38 AM in Crime, Litigation, etc., Haredim, Israel | Permalink

"The [harassment] and its style are no less than that of [the Nazi propaganda newspaper] Der Sturmer.…The decision of those [haredim] who choose to join the army is not easy."