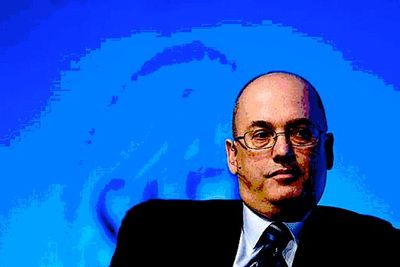 Steven Cohen and SAC Capital Advisors were the targets of Rabbi Milton Yehosua Balkany's extortion plot. Balkany, the brother-in-law of former Agriprocessors VP Sholom Rubashkin and his brother Moshe – both also convicted federal felons – is currently in federal prison after being convicted of extortion.

Now SAC Capital Advisors and Cohen have new woes that look much less promising for them, as the AP reports:

SAC Capital Advisors is charged with wire fraud and four counts of securities fraud; prosecutors allege the crimes were carried out from 1999 through at least 2010.

Cohen himself wasn't named as a defendant in the criminal case, but the charges could threaten to topple a firm he founded and that once managed $15 billion in assets.

Last week, an SAC Capital spokesman said that the related allegations brought by the Securities and Exchange Commission have "no merit" and that "Steve Cohen acted appropriately at all times."

SAC Capital has been at the center of one of the biggest insider-trading fraud cases in history. Four employees have already been criminally charged with insider trading, and two of them have pleaded guilty. And an SAC affiliate has agreed to pay $615 million to settle SEC charges.

Cohen, who lives in Greenwich, Conn., is one of the highest profile figures in American finance and one of the richest men in America. He is among the handful of upper-tier hedge fund managers on Wall Street who pull in about $1 billion a year in compensation.

The SEC alleged that Cohen received "highly suspicious information that should have caused any reasonable hedge fund manager in Cohen's position to take prompt action to determine whether employees under his supervision were engaged in unlawful conduct and to prevent violations of the federal securities laws."

An SAC portfolio manager, Mathew Martoma, has pleaded not guilty to insider-trading charges accusing him of earning $9 million in bonuses after persuading a medical professor to leak secret data from an Alzheimer's disease trial between 2006 and 2008. Authorities haven't disputed reports that Cohen is the "Hedge Fund Owner" repeatedly referenced in a criminal complaint against Martoma.

The papers describe how Cohen rejected the advice of his own analysts and instead bet heavily on Martoma's tips about secret data from a study of an experimental drug. After learning through Martoma in 2008 that experiments weren't going well, Cohen instructed his top trader to begin dumping stock, "and to do so in a way to not alert anyone else," the papers say.…