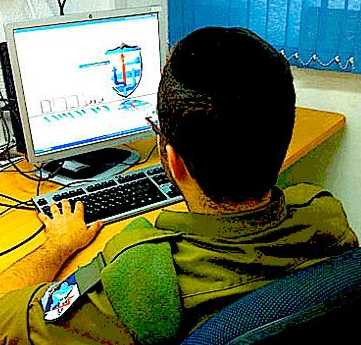 "I" working at his computer (courtesy IDF Spokesman)

According to a report in Ynet, the top secret system provides an operational solution to a security gap.

"We could have taken this to a civilian company which is an expert in the field, but we preferred to leave it in the army and allow the team with the haredi soldiers to develop the system. They succeeded and even earned much [internal] recognition. Additionally, their success within the IDF saved us millions of shekels,” a source in the Computer Services Directorate reportedly said.

One of the haredi soldiers who developed the new system is “A,” a 29-year-old from Petah Tikva who is a married father of one. He asked to remain anonymous for fear he would be harassed by fellow haredim.

After four-and-a-half years of IDF service, he is now currently applying for jobs at leading hi-tech companies – and evaluating multiple job offers.

"The job I get I will combine [work] with Torah study in the evenings. In the army, I began on the application development team, and I continued onto a post in programming in the infrastructure team. In a similar system within civilian life, if there a problem, you reject the project. In the military, there is a deadline, and we worked long hours for over six months in order to complete the mission. We won awards for excellence for the system, and we got great satisfaction from the responses we received from the military high command, which just wanted us to add more and more to the system.

"It brings me enormous satisfaction and great pride. In the beginning, when I lived in a haredi area in Jerusalem, it was hard for me to go around in uniform, but today the situation is reversed. For a young haredi who is deliberating [serving in the IDF] and [who is] interested, I say that the decision is personal, but to me, the army gave a lot of good things. It put me in the job market, so I believe more haredim can join. I felt that I could give not only to the army and the people of Israel, but also to place from which I come as someone setting a precedent,” “A” reportedly said, noting that he finds the haredi campaign of incitement and violence against haredi soldiers to be "internal haredi politics [and] absolutely disgusting."

Graduates of the Computer Services Directorate elite Lotem unit like “A” are usually fought over by high-tech companies when their army service is over.

First Sergeant “I,” who served with “A,” is a yeshiva graduate. (A significant number of haredi soldiers are yeshiva dropouts or were expelled from yeshivas for conduct issues.)  He is now involved in the development of a biometric data system for handling crossings of Palestinians from Gaza into Israel.

"This way we know quickly from security officials if a Palestinian may enter Israel or not. There are much less delays and it also prevents disturbances that can harm soldiers at the checkpoints. Most of the Palestinian workers want to come to make a living, and our job is to make sure the system will continue to operate smoothly at dozens of locations.…

"It doesn’t happen anymore that I ride the bus and do not meet a haredi soldier like me. If you live in the haredi tradition, there is no reason [the IDF] will not treat you accordingly [i.e., according to your needs as a haredi]. As a haredi, I believe that whoever learns Torah all day, he will have to stay in yeshiva, and those who do not – they will have the opportunity to serve the country and have a livelihood,” ,” “I” reportedly said.