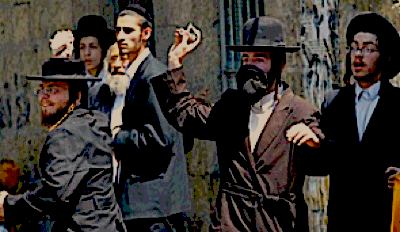 …D., a haredi soldier, will not forget his visit to the city of "Torah and the pious," Bnei Brak, for a long time. “It began as usual,” he said, explaining the routine that was part of his life for the last few weeks. “Kids ran after me and screamed, ‘Hardak (derogatory term for haredi soldiers used within their own communities), predator,' 'Hardak, get out’ and things like that. With time you learn to accept it humourously. They are children, after all.

"Suddenly I notice one of them picking up a large rock sitting on the side, and throwing it at me. I see the rock in time and duck, but it easily could have ended differently.”
Were there adults around?

“Yes, it was in the late afternoon. There were many adults who stood near the spot; everyone was silent and no one did anything.”

Are you in uniform now?

'Adults watched and did nothing'

"In the end, every haredi who enlists chooses to do so without the influence of politics. This effects his personal life, regardless of the fact that they wish to draft yeshiva students and whether this is good or not. As long as these incidents increase and get worse, the haredim will only lose through the media. There are dozens of incidents like this… No one speaks of them and no one complains. People are frustrated and don't think it will help."

B. is a soldier from Beitar Illit. He has been living through an ordeal which began a year ago when he started his IDF service, experiencing swearing and name calling on a daily basis. "They did not beat me, but everything else has been done," he said. B.’s daily routine until recently included one main concern: When could he change from haredi civilian clothes into IDF uniform, and when could he change back.

"I get up early and put on civilian clothes for morning prayers. It's impossible to go to minyan (quorum) anymore in uniform. They yell at me and throw me out. Then I hurry back home to take the uniform, which I put on while on the bus, because you can’t at home. There is some distance to go before you reach the bus station, and if I wear the uniform they attack and shout. When I return from base, I change again. I need to shop, to pray, and you cannot do so in uniform. I just got permission to wear civilian clothes, so I have stopped being a target.” The escalation in the reactions against him is something he felt only recently. "But it quickly became intolerable: Hostile looks, yelling, crowds gathering everywhere I go, just a nightmare. They stole a pair of uniforms from the clothesline. What is more surreal than that?”

"The locations that are most prone to rioting are streets, especially from children and young yeshiva students. They attack, but sometimes adults join them too. All the soldiers in Beitar Illit suffer greatly, and that's why we got permission to wear civilian clothes."

"Nothing. That is what is most infuriating. They act as if nothing is happening. I expect to have an adult tell a child that you do not talk like this, certainly not to adults, but they are silent. Their parents ignore it as well. They prefer to turn their heads the other way. Most of them are against it, of course, but they are a silent and passive majority who do not want to take sides."

B. says that he expects members of the United Torah Judaism party to be vocal on the issue, "They received thousands of votes from soldiers, our votes, and they are not willing to protect those who voted for them. With the behavior of the silent majority we have already made our peace, but them? At least protect against incitement and violence."

H., a resident of Modiin Illit and a career officer, is not at home enough to get a "warm reception." Youth from the neighborhood have found an original way to let him know exactly what they think about his military service by marking his door with graffiti on a daily basis.

"It was not a physical injury, but damage to property," he said. "At first they hung notes, and after that when it did not affect us enough in their eyes, they moved to the door itself – carving statements and curses on it. It always happened in the afternoon, at the hour when my wife returned from work – straight to this reception. Once I even stayed home hoping to catch them red-handed, but it didn’t happen."

H. learned the identities of the children behind the incidents when their school principal approached him. "He came to me on his own initiative and told me what happened, and also that in response he had forced them to write a letter of apology, which they gave me. It was clear to me that this is not a real apology, and all of it came under threat from the principal.

"These children hear all sorts of things at home, and this is the result. It shows what is going on in the haredi street, what the feelings are, and the feelings are ones of hate."

A. is newly enlisted, and lives in a community in the north of the country, where there is a high concentration of haredim. To his “delight,” the first incident occurred less than a month ago.

"I walked through a street in a haredi neighborhood, and suddenly kids began chasing me and yelling," he says. "The first time it was really annoying, I felt terrible afterwards. But in the end, you get used to everything and you get used to this too. I have already stopped turning back every time someone calls me a 'Hardak' or other annoying things. The annoyance has passed, but I was torn. You see people who are like you, from your community, who go out like that against you – it's very difficult.

“I remember that in the beginning, when the first Hardakim posters appeared, it was an attraction. Other soldiers and I looked at it as a joke. We laughed at the idea. It was funny – until there were the first cries on the street, and then you understand that someone has taken it seriously. In most cases, it is children, but it is still hard to take, again and again, when you get that reception on your street.

“Two temples were destroyed because of hatred and civil war, and I ask why? I serve in the army not in order to fight my people, but to protect them. If you have any complaints to Yair Lapid, turn to him. What do you want from me? What happened in Mea Shearim really shocked me. Now I never go to Jerusalem in uniform." We're talking about the capital, where there is a huge concentration of haredim.

"I have no choice. If I come, it is always with my wife and child, and I would not want to risk their lives and make myself a target, as much as this sounds painful."

M. lives in Bayit Vegan, a Jerusalem neighborhood considered solid and moderate, but recently his life has become a living hell.

"The haredim serving in the military were always looked at a bit askance, but it was something unspoken. Today it has become true terror. I have been spit on countless times when I was in uniform. Once even in the presence of my wife and child. She did not believe me that this is the case, until she saw it herself. Until then, she was sure I was exaggerating.

"Daily life has become unbearable. I am a 'Nazi,' 'Lapid,' 'infidel,' of course with spitting and screaming everywhere. It starts in the morning, when I wait for the bus – and ends only when I return at night. Recently I got permission to wear civilian clothes, and since then the situation has calmed greatly."

Who are the attackers?

“In my situation, it is mainly young men, aged 17-18, and every time I go out of the house in uniform, and they are not in yeshiva, it starts anew. One yeshiva head who saw me on the street asked me to put the tallit (prayer shawl) under my uniform, because he said I was 'giving authorization' for haredim to enlist, and once I enlisted, to him I was no longer haredi."

M. also lodged a police complaint and civil suit for defamation against the cartoonist of the 'Hardakim' campaign.

"I complained against Avishai Chen. This is the guy responsible for some of these horrible caricatures. After this, I got harassing phone calls. In three months time, there will be a discussion on the issue. Currently the attorney general is reviewing the complaint, to see whether it falls under freedom of speech or not.

"Meanwhile, the rabbis are silent, the IDF is passive, and our life has become a nightmare. Where are the haredi MKs? We're not getting any response from them. Nothing. We are abandoned by both sides."

Posted at 01:38 AM in Crime, Litigation, etc., Haredim, Israel | Permalink