Police in the Israeli city of Bet Shemesh reportedly detained a haredi couple who ordered a woman move to the back of a city bus operated by the scandal-plagued Egged Bus Company, sparking a riot. 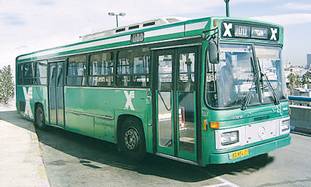 Haredim Riot After Haredi Couple Arrested For Ordering Woman To Back Of Bus
Shmarya Rosenberg • FailedMessiah.com

Police in the Israeli city of Bet Shemesh detained a haredi couple who stopped a city bus operated by the scandal-plagued Egged Bus Company from leaving unless a woman move to the back, Ynet reported.

About an hour later, haredim rioted in response to the arrests, smashing bus windows with a hammer and hurling objects and stones at a bus carrying schoolchildren and women as other haredim stood in front of the bus to stop it from leaving. In addition, at least three other buses were reportedly stoned.

"I stopped at a station where a number of haredim were standing. I thought they wanted to board the bus so I opened the doors, then two of them blocked the bus. One of them took out a hammer and began shattering the windows. There were many women and children on board. I tried to drive forward a little to scare them. After a few seconds they moved and we continued on our way," bus number 417's driver told Ynet.

"I boarded bus no. 417 headed from Ramat Beit Shemesh to Jerusalem. It was relatively full with parents and children because it's the summer vacation. At one of the stops four people in haredi attire blocked the bus and began to strike its windows with objects they were holding. The frightened passengers tried to move away from the windows. Eventually the haredim ran away and the bus continued on its route," Moshe, a passenger on the bus, reportedly said.

Police based in in Beit Shemesh have a long history of failure to enforce the law against haredi criminals.

Forced public gender segregation is illegal in Israel, but the previous Likud-led government skirted court rulings meant to stop it, and little enforcement of the law took place.

Egged has also repeatedly skirted High Court of Justice rulings forbidding both gender segregation and an advertising blackout imposed by Egged on any ads placed on its buses depicting females.

Egged claims that it has taken these measures to try to avoid haredi violence and vandalism.

That violence and vandalism has been made far worse by failure to properly police it.

In Israel, police are a national agency controlled by the ruling coalition. While there is a veneer of independence, in practice, decisions to police or not police hot button issues like haredi crime can often be traced to the political needs of the governing political party.

When she headed the Kadima Party, it was Livini’s opposition to both haredi gender segregation and Israel’s Likud Prime Minister Benjamin Netanyahu’s enabling of it that forced Netanyahu to take action against against the gender segregation. But when Livni was deposed as Kadima’s head, Netanyahu’s relatively weak actions stopped.

Netanyahu needs the support of haredi political parties to be able to hold power if his current government falls.

Police in the Israeli city of Bet Shemesh reportedly detained a haredi couple who ordered a woman move to the back of a city bus operated by the scandal-plagued Egged Bus Company, sparking a riot.