Haredi Members of Knesset Moshe Gafni and Yisrael Eichler from the Ashkenazi haredi United torah Judaism Party (UTJ) ripped their shirts as a sign of mourning just before the vote was tallied. UTJ MK Rabbi Meir Porush (pictured at right) went further, handcuffing himself to the speakers' podium in protest. 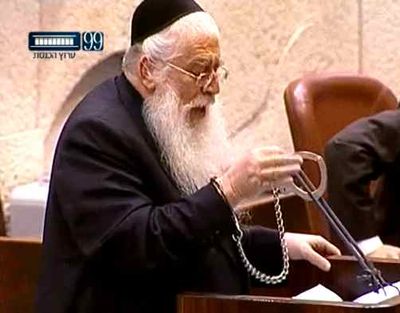 For a bill to become law it must pass three readings in the Knesset, Israel’s parliament.

Yesterday, the government told the High Court of Justice that it’s haredi draft bill would not have time to pass all three readings this summer before the Knesset session ends August 5. The schedule of the Knesset was, it claimed, too full, and the law’s third reading would have to take place in the fall.

This would give the government a pretext to annul the draft notices already sent to several thousand haredi yeshiva students who legally must report to IDF induction centers in August or face penalties, and the government has no way to legally exempt them because the old law that gave blanket exemptions to all haredi yeshiva students was ruled illegal by the High Court 17 months ago and is no longer in force.

To appease their haredi allies, Prime Minister Benjamin Netanyahu and his Likud Party have worked feverishly since the blanket haredi draft exemptions were ruled illegal to find ways to scuttle any draft of haredim while, at the same time, looking as if they are sympathetic to the vast majority of Israelis who want those haredi yeshiva students to be drafted just like their own children are drafted.

Netanyahu has little chance of remaining prime minister after the next election unless those haredi political parties support him.

Early this morning, the haredi draft bill that will not have its final vote this summer was given its first, and it passed, 66 to 29, according to an Army Radio report cited by the Jerusalem Post.

Haredi Members of Knesset Moshe Gafni and Yisrael Eichler from the Ashkenazi haredi United torah Judaism Party (UTJ) ripped their shirts as a sign of mourning just before the vote was tallied. UTJ MK Rabbi Meir Porush went further, handcuffing himself to the speakers' podium in protest.

The bill passed after six hours of speech by both coalition and opposition MKs. 66 Knesset members voted in favor of the proposal, while 29 opposed.

“The era of segregation, in which we were divided, is over. The era in which 50 percent of each age group does not serve the state and does not carry the responsibility for Israel’s economy is over. The era in which we separate secular Jews and haredi Jews, when our enemies don’t make that differentiation, is over,” Science and Technology Minister Yaakov Perry of the Yesh Atid Party, whose committee drafted the bill, said just before the vote.

The bill even won the votes of the opposition Labor Party based on the idea that all Israelis should serve in the IDF, despite what it called “many problems and injustices” with the bill that it hopes to change before the bill has its final reading.

Yesterday, the Knesset authorized the formation of a committee to prepare the bill for its second and third readings.

The committee is headed by a pro-haredi-draft MK, Ayelet Shaked of the HaBayit HaYehudi Party.

The six member committee had to be expanded to seven members after the two haredi parties could not decide on a single MK to represent them.

The version of the bill passed today only mandates obligatory service for haredi yeshiva students beginning in 2017, and any haredi yeshiva student who is 22-years-old or over on the day the law passes its final reading will be exempt from the draft in perpetuity. Those 19- to 22-years old can defer their service until they turn 24 and will at that point be eligible for an exemption that lasts the rest of their lives. 17- and 18-year-old haredim will be able to defer their service until they turn 21, when they will have to serve.

Haredi Members of Knesset Moshe Gafni and Yisrael Eichler from the Ashkenazi haredi United torah Judaism Party (UTJ) ripped their shirts as a sign of mourning just before the vote was tallied. UTJ MK Rabbi Meir Porush (pictured at right) went further, handcuffing himself to the speakers' podium in protest.