An anonymous letter purportedly from Chabad community activists and rabbis calling for a boycott of the Oz Vehadar Talmud and other books by Oz Vehadar has been published in Israel. 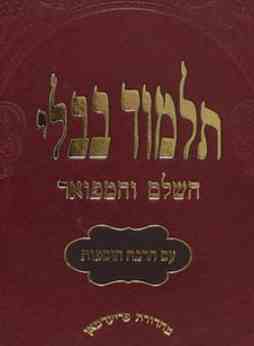 Chabad dot info reports that an anonymous letter purportedly from Chabad community activists and rabbis calling for a boycott of the Oz Vehadar Talmud and other books by Oz Vehadar has been published.

Agri Star's owner, Hershy Friedman, endowed the money to pay for Oz Vehadar's Jerusalem Talmud. It is unknown if this link to the owner of the former Agriprocessors glatt kosher slaughterhouse once owned by Chabad hasidim played any role in the boycott.

The anonymous Chabadniks behind the boycott say they are upset that Oz Vehadar does not quote their late rebbes – at least one of whom many Chabadniks still consider to be alive (in some sense), even though he died in 1994.

However, what the letter writers do not say (besides the Agriprocessors connection) is that Oz Vehadar won't quote Chabad sources because of Chabad's widespread messianism and the Chabad belief that their dead rebbe is still alive or only "concealed" and that he will soon be revealed as the messiah – beliefs that are clearly against normative Jewish tradition:

Don’t be a partner in the war against Chabad

Lately, we merited to blessed era of a publishing period, in which many dignified and helpful seforim in all fields of Torah, as well as a new and beautiful edition of the basic from chumash to halacha were published. This great project merited great encouragement from the Rebbe who pressed and urged those involved in this field.

In addition to the joy of the new era in which learning is made more convenient and qualitative, we as Chassidim need to publicize those individuals who are acting harshly in this field, sometimes intentionally  and sometimes out of suspicion. But practically, they are ignoring the chidushei Torah of our Rebbe’im, thereby causing that thousands of Jews are deprived of learning these chidushim, and even more yet, becoming acquainted to with the Torah greatness of our Rebbe’im.

In their audacity, they are interested in selecting who is the godol btorah. One who is not according to their desire, they will wage war to remove their words of Torah from everywhere possible because in their opinion this is not for the klal Yisroel.

Such wild deeds, were, to our pain, done, not only lately.

The known Torah of Nigleh of the Alter Rebbe, the Tzemach Tzedek and the Rebbe, were removed from many dignified seforim that later became an inheritance for the public.

The natural shock and reaction that passes over every chossid from these acts, becomes magnified seven fold by the Rebbe. Facts and responses from the Rebbe addressed on a similar matter will be publicized soon. Just to cite one of the Rebbe’s responses which he wrote when one author ignored the Alter Rebbe’s Shulchan Aruch, “My blood is being poured”.

If for the past we need to make a big and bitter macho’o (objection), in our time, when a publishing house is publishing every year new and qualitative seforim, amongst them compilations on various topics it is surely necessary. In addition to the fact, that every Jewish circle is quoted besides Lubavitch, the owner of the publishing house declared many times with chutzpa (and did not find reason to explain or justify himself) that he will never quote from our Rebbe’im.

That is what he is doing. Besides some few quotes from the Alter Rebbe’s Shulchan Aruch (where it was appropriate and necessary to cite) the publication house ”Oz Vhodor” does not publish for its learners from the treasures of nigleh and chassidus from the Rebbe’im.

In the section כפתור ופרח, in the mesivta gemoro, are cited short topics in avodas Hashem that relate to the gemoro. They are from all sifrei haChassidus. You will not find anything form sifrei Chassidus Chabad!

In the Haggada Shel Pesach published this year, you will fund a compilation from all Hagadas in the world but the הגדה של פסח עם ליקוטי טעמים ומנהגים  from the Rebbe, in which the treasures don’t stop to puzzle everyone who searches for Torah from all circles in the last 66 years, is not mentioned even once!

The Rebbe’s unique insights on hilchos chanuka, answer all the questions from every corner in Nigleh (of Torah), but the משנת המועדים, decided rather to leave the question unanswered but not to cite from the Rebbe.

In the Shabbos zmiros that was lately released, they mention the custom of girls kindling shabbos candles before the wedding in the name of the resposna שו”ת אז נדברו. The staff of Oz Vhodor never heard that the Rebbe clarified this halacha from the foundation.  And many more tens of seforim which are “clean” from suspiciously containing Torah of נשיאי חב”ד  r”l.

What can be done?

Thousands and tens of thousands בלה”ר of chassidei Chabad and all who respect the Rebbe have no idea to picture for themselves how with a lack of awareness they become supporters to these acts.

Thousands of gemoros which are annually purchased by more than 60 chabad schools, hundreds of shasim that are bought for every new home, hundreds of seforim for smicha, and the huige quantity of other seforim generate a big income, and a strong support for the Oz Vhodor.

Also those who innocently sponsor the publication of seforim are unaware of Lubavitch being omitted by the staff. There is no doubt that most of them would not consent to this and are not ready to become a partner in ex-communicating Lubavitch. The hierarchy of Oz Vhodor figure that their dark acts will pass in silence and no one will stand out and demand the honor of lubavitch.

It is definite that us as Chassidim have the obligation to clarify that we have no connection with these people, and not even one Chabad penny should go to them.

When one will ask, their gemoros seem to be beautiful with a nice compilation?

There are two answers

1) Even if we would need to study from a written manuscript and a scroll of parchment in order not to participate in the desecration of the kovod the Rebbe’im, we would do that.

2) To date, there three different Shas sets (besides Oz Vhodor), and in many aspects are even better than them, such that there is no need to compromise in the convenience and pleasure in learning.

Signing with a prayer that these acts will be removed from the world, יתמו חטאים ולא חוטאים

Chassidei Chabad and those who revere the Rebbe amongst other circles

P.S. It is an obligation to note, that prior to publicizing this letter long and continuous consulting took place with rabbonim and mashpi’im who are already involved in this field for decades. They are those who are at the head of this vaad. This includes as well, as many of the gedolei horaboim and mashpi’im.

An anonymous letter purportedly from Chabad community activists and rabbis calling for a boycott of the Oz Vehadar Talmud and other books by Oz Vehadar has been published in Israel.