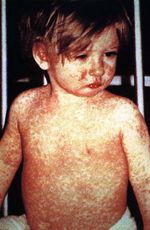 The measles outbreak in haredi Brooklyn is finally over, the New York City Department of Health and Mental Hygine says. A measles outbreak in Brooklyn is over, the New York City Department of Health said.

The department in its announcement on Monday thanked the [haredi] Jewish communal leaders for helping stem the outbreak.

From March to June, 58 cases were reported — 30 in the Williamsburg section and 28 in Borough Park. All the cases involved adults or children who had  no documentation of being vaccinated at the time of exposure because they refused or due to delays.

Three of the cases resulted in complications, including one case of pneumonia and two hospitalizations. [I believe there was also at least one miscarriage.]

The outbreak had originated from a [haredi] person who traveled to London['s haredi community, where similar overcrowding and below normal vaccination rates had alread sparked an outbreak] .…

The measles outbreak in haredi Brooklyn is finally over, the New York City Department of Health and Mental Hygine says.