More sexting between Weiner and women he isn't married to has – predictably – surfaced. 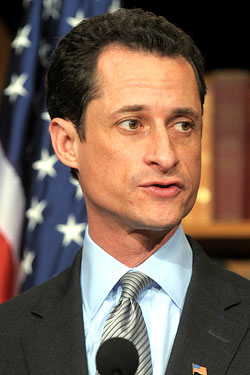 More sexting between former US Congressman Anthony Weiner and women he isn't married to has – predictably – surfaced.

Weiner is currently a top candidate for mayor of New York City and a favorite of many haredi rabbis – despite having only recently texted pictures of his erect penis to women he did not really know and was not married to, and despite the fact that Weiner is married to a non-Jew.

I saw his press conference held late this afternoon with his wife, Huma Abedin, in which Weiner admitted (in a slippery way, of course) that his sexting continued long past his resignation from Congress, continuing until, if you do the math, he decided to publicly enter the race for mayor.

Life would be so much simpler – and so much better – if his smart, talented, gracious wife Huma Abedin were running for mayor instead of Weiner.

More sexting between Weiner and women he isn't married to has – predictably – surfaced.