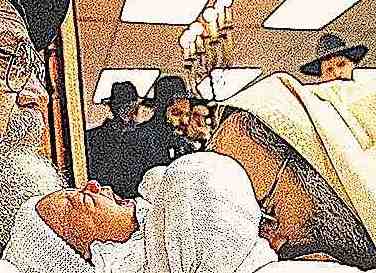 JewishWorldReview.com has an interesting piece that (unintentionally) explains why haredi groups so fear New York City's informed consent requirement  for circumcisions done with metzitzah b'peh (MBP), the dangerous mouth-to-bleeding-penis sucking done by many haredi mohels after cutting off the baby's foreskin.

Here is an excerpt:

Herbert and Catherine Schaible's faith in the laws of God put them on a collision course with the laws of man when their 8-month-old son, Brandon, fell ill in April.

As members of First Century Gospel Church, a Philadelphia Christian congregation that shuns medical care as an affront to G0D, they turned to prayer when Brandon became ill with what proved to be a fatal case of bacterial pneumonia.

Prayer was what they turned to in January 2009 when their 2-year-old son, Kent, also died of bacterial pneumonia, a death that led to involuntary-manslaughter convictions, 10 years' probation and a court order to seek medical care when their seven other children got sick.

For the Schaibles' attorneys, prayer will have nothing to do with defending what legal experts say is one of the thorniest of murder cases.

Crampton said the Schaibles' case "lies at the intersection of society's right to protect the life of the child and the parents' right to both the free exercise of their children's religion and (control over) the upbringing of their children."

The Schaibles are being held without bail pending a June 12 preliminary hearing. The couple's seven children, ranging in age from about 8 to 17, were placed in foster care after Brandon's April 18 death.…

"For parents, there is no religious exemption, no absolute license that lets you do what you want in the name of religion," Crampton said.…

The Schaibles' biggest legal problem may be that they have been here before.…

"I don't see how you can prove intent to kill," Kairys said, referring to one of the components of the third-degree charge. Still, Kairys acknowledged, a jury could find them guilty of the charge under a theory of a "reckless disregard" of the consequences of their acts.

In the Schaibles' first trial, their lawyers argued that religion was not the issue; the parents simply did not know how sick their child was.…

The informed consent removes the defense that the parents and the mohel did not know the dangers of MPB. That makes it much easier to convict on manslaughter or murder charges if a prosecutor should ever decide to indict.

That quote – which is backed up by a definitive US Supreme Court ruling not directly cited in this JWR piece – explains why the haredi lawsuit against NYC has little chance of success, and it also is the basis for what might soon happen to haredi parents and mohels who allow or do MBP on defenseless children.

In America, hasidim, you do not have the right to sacrifice your children in the name of your religion.