Empire tells us whether or not is uses arsenic-based drugs and Naftali Hanau of Grow and Behold Foods wants his previous remarks clarified. 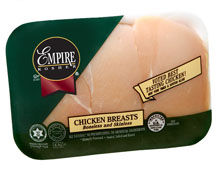 It took three weeks, several exchanged emails and a scheduled phone call from Empire's spokesman that never happened, but Empire Kosher Poultry finally emailed me late this afternoon with a definitive answer about use of arsenic-based drugs in chicken and other poultry:

FailedMessiah.com: Does it use those arsenic-based drugs in any other manner?

Naftali Hanau of Grow and Behold Foods now insists that the reason he did not answer my questions regarding worker pay, their health care coverage and its copay cost per worker immediately when I asked them almost two years ago was that he wanted to be "exact."

"I always prefer to wait until exact information is available when someone who is a journalist is looking for information," Hanau wrote me yesterday.

But Hanau's answer when he gave it a day after being asked was both incomplete and telling. He said the workers were unionized and they made $14 per hour. He did not answer the question about health insurance copays.

But he could have easily immediately answered that the workers are unionized, given a ballpark figure for hourly wages and health insurance, and gotten back to me the next day with the details.

And that is damning because Grow and Behold was started in part as a response to the Rubashkin scandals, and these are details anyone concerned with treatment of workers would have known without having to ask plant management.

He also kept claiming that I had misrepresented his position on all this, because – even though he said nothing about this at the time – when he did not answer immediately, all he was doing was trying to get me the "exact information."

I pointed out that if he misspoke then, or if he was imprecise, or failed to frame his actions in way that would make them appear better for his business, the onus is on him, not on me. Nothing I reported was false or out of context or misleading.

Hanau did not seem to understand my point, although he did write that he wasn't blaming me for the 'misrepresentation.'

I think that since Grow and Behold markets itself as a kinder, gentler, more natural and healthier alternative to other kosher meat companies, it should get third party unannounced audits to confirm all its claims about how its cattle and poultry are raised and slaughtered and should make those audits publicly available to all.

For those interested, its been pointed out in the comments to my previous post that KOL Foods animals are raised at a higher level of natural and grass fed than Grow and Behold's are.

It's been almost three weeks, and Agri Star still hasn't answered any of the questions regarding arsenic-based drug use that I asked.

Related Post: Is Your Kosher Chicken Safe To Eat?

Empire tells us whether or not is uses arsenic-based drugs and Naftali Hanau of Grow and Behold Foods wants his previous remarks clarified.