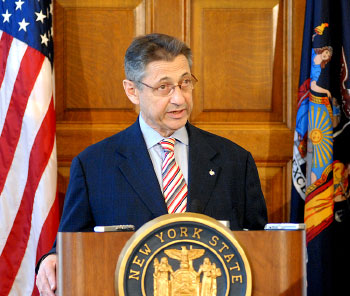 The document — a Feb. 14, 2012, email sent to Assembly lawyers from an attorney representing two Lopez staffers who accused Lopez of groping them — suggests Silver had an inappropriate relationship with a top aide.

The email, obtained by The News, claims Lopez “repeatedly” told one of the women “that he wanted their relationship to be the same as Mr. Silver’s to his Chief of Staff and was explicit in what that meant.”

The email also claims that the groping victims were so afraid of Silver and his chummy relationship with Lopez — and so upset that the Assembly had failed to “fully investigate” their allegations — that they declined an offer to take another job in the Assembly.

The note from lawyer Mariann Wang, who is the New York partner of celebrity lawyer Gloria Allred, does not offer any proof that the Democratic speaker had a relationship with his chief of staff beyond the third-hand account attributed to Lopez, who was using it in an effort to seduce a staffer.

Silver’s chief of staff is longtime confidant Judy Rapfogel, who earns $153,385 a year and is widely seen to be among the speaker’s most loyal aides.

Rapfogel, who is married to William Rapfogel, chief executive officer of the Metropolitan Council on Jewish Poverty, called the comments in the email “absurd and insulting to all women.”…

The Daily News report goes on to document Silver's mishandling of the allegations against Lopez and notes that mishandling exposed other women to harassment and mistreatment by Lopez.