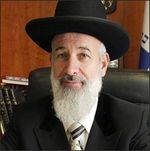 Four men described as being “of varying ages and from different sectors of society” are claiming that they were sexually harassed and molested by Israel’s current Ashkenazi Chief Rabbi Yona Metzger. 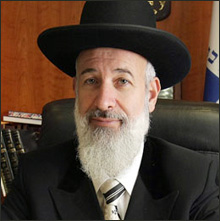 Four men who Ha’aretz describes as being “of varying ages and from different sectors of society” are claiming that they were sexually harassed and molested by Israel’s current haredi Ashkenazi Chief Rabbi, Rabbi Yona Metzger.

The allegations go back as far as the late 1980s.

The men told their stories to the Israeli daily newspaper Ma’ariv, which claims that two of the men were examined by polygraph test at Ma’ariv’s insistence.

Both men reportedly passed the test.

Some of these allegations were first made public years ago, not long before Metzger ran for the position of Ashkenazi chief rabbi.

Just as he did then, Metzger denied the allegations against him and told Ma’ariv that they were simply attempts to destroy his reputation.

“David” who is secular, first told Ma’ariv three weeks ago that in the late 1980s at a wedding where Metzger officiated, Metzger fondled his chest and his arms. “David” also claimed that Metzger slid his hand under “David’s” shirt while the two were talking.

“David” appears to be one of the men who first made sexual harassment and extortion allegations against Metzger public over a decade ago. Those allegations were mishandled by Israel’s chief rabbinate, which tried to deal with them in a beit din-like proceeding.

But in early April, a new allegation against Metzger was brought to Ma’ariv.

An Orthodox Jewish man claimed that he had recently met with Metzger for a halakhic consultation. During that meeting, the possibility of advancing the man’s career was discussed. Then, at Metzger’s request, the man removed his shirt and Metzger groped his chest and arms.

As Ma’ariv attempted to confirm the Orthodox man’s allegations, the paper found another man (who we will call Alleged Victim #3 or AV3) who had made similar allegations against Metzger.

AV3’s allegations were brought to Israel's then-Sephardi-Chief-Rabbi Eliyahu Bakshi-Doron in 1998, when Metzger was running for the position of chief rabbi of Tel Aviv.

Bakshi-Doron was then the head of a special disciplinary committee formed by the Israel’s chief rabbinate to investigate allegations of ketubot (halakhic marriage contracts) allegedly forged by Metzger.

Bakshi-Doron’s committee decided not to publicize the allegations.

However, the allegations were subsequently reported in the Israeli press at that time.

Bakshi-Doron confirmed to Ma’ariv this year that AV3 told him then that Metzger had fondled him without consent.

But while documents recently received by Ha’aretz describe the bitter struggle waged by Bakshi-Doron (and a few other rabbis) against Metzger's bid to become chief rabbi of Tel Aviv, one of those documents – called the “cover-up document” by Ha’aretz – retroactively cleared Metzger after his election as chief rabbi of Israel in 2003.

In 1998, the chief rabbinate suspended Metzger's certification to serve as chief rabbi of a large city pending investigation of multiple allegations that Metzger had violated both Jewish law and Israeli law.

At the disciplinary hearing held by the panel, the primary complaint against Metzger was made by Metzger’s driver, who claimed that Metzger had signed the driver’s name as a witness to dozens of marriage contracts without the driver’s knowledge. Doing that, the driver said, allowed Metzger to officiate at many more weddings per night than he otherwise could have – weddings that he was taking money, most likely illegally, to perform. Metzger was allegedly paid $500 and $1,000 for each wedding ceremony he officiated at.

A graphologist, Shaul Hilleli, had been hired by the chief rabbinate to examine the signatures. He found the forgery allegation had substance.

During the same hearing at which his driver testified against him, Metzger reportedly evaded Bakshi-Doron's questions about other alleged illegal behavior by Metzger – including allegations of sexual harassment and molestation.

Metzger would not run for the position of chief rabbi of Tel Aviv.

In exchange, Metzger certification to serve as the rabbi of a large city would be reinstated by the chief rabbinate, and Bakshi Doron’s panel drop its investigation into Metzger’s alleged criminal behavior.

The deal allowed Metzger to remain as the rabbi of North Tel Aviv.

Less than five years later, Metzger would run for and be elected as Ashkenazi chief rabbi of Israel, despite lacking the rabbinic background or qualifications to hold the position – and despite the previous allegations against him and his agreement made with the chief rabbinate to escape punishment for them.

Metzger, who was questioned under caution for the second time since being elected chief rabbi in 2003 yesterday, this time on serious fraud and money laundering charges, was put into office in a backroom deal orchestrated by previous haredi leader Rabbi Yosef Shalom Elyashiv, who – I first reported – admitted that he knew about the allegations against Metzger before he backed him.

When I asked why he backed Metzger for chief rabbi anyway, Elyashiv replied, “to restore the glory to the chief rabbinate.”

Metzger, whose home and office were both raided by fraud squad police yesterday and who was questioned for 10 hours at the squad's headquarters under caution, was reportedly released to restrictive house arrest.

Metzger must remain in his home.

He is forbidden to enter his office for the next five days.

He is forbidden to leave the country until the conclusion of the police investigation.

And he may not be in contact with any of the three men arrested in the fraud and money laundering conspiracy case.

Four men described as being “of varying ages and from different sectors of society” are claiming that they were sexually harassed and molested by Israel’s current Ashkenazi Chief Rabbi Yona Metzger.