Bobov 48 bans baby carriages on Shabbat because it holds the the Brooklyn eruv is not kosher, Bobov 45 bans smartphones, and Bobov Monsey's attempt to trademark the name Bobov in Canada to keep competing Bobov groups from using it fails. 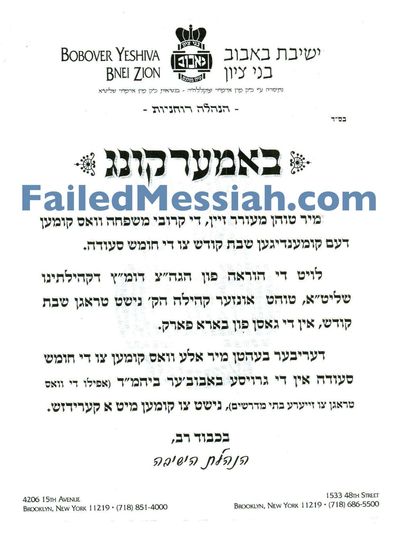 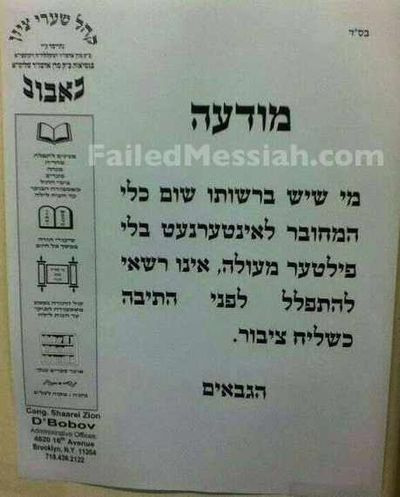 THE REGISTRAR OF TRADE-MARKS

IN THE MATTER OF AN OPPOSITION by Congregation Talmud Torah D’Chasidei Bobov of Monsey and  Baruch C. Greenfeld to application No. 1,276,632 for the trade-mark BOBOV in the name of United Bobov International, Inc.

[1]        On October 21, 2005, the applicant United Bobov International, Inc. filed an application to register the trade-mark BOBOV, based on use in Canada in association with the wares “matzo” and with various charitable, educational and religious services. The applicant claims use of the mark BOBOV since 1958 for the wares. The earliest date of first use claimed for the services is 1946, for educational services, while the latest date of first use claimed for services is 1985, for religious services and the like.

[2]        The applicant also claims a priority filing date of April 21, 2005, pursuant to s.34 of the Trade-marks Act, based on the filing of corresponding trade-mark applications in the United States of America for the wares and services specified in the Canadian application.

[3]        The subject application was advertised for opposition purposes in the Trade-marks Journal issue dated June 10, 2009 and was opposed on July 28, 2009 by  Congregation Talmud Torah D’Chasidei Bobov of Monsey and Baruch C. Greenfeld.

[6]        I will set out the grounds of opposition summarily, for the reason that I agree with the applicant’s submissions at the oral hearing. A detailed examination of the case is therefore unnecessary.

[7]        This case cannot be decided on its merits - which are unknown as none of the parties has filed evidence. It therefore remains for the case to be decided on “technical” issues. In this regard, there is a legal onus on the applicant to show that the application does not contravene the provisions of the Trade-marks Act as alleged by the opponents in the statement of opposition. However, there is also, in accordance with the usual rules of evidence, an evidential burden on the opponents to prove the facts inherent in the allegations pleaded in the statement of opposition: see John Labatt Limited v. The Molson Companies Limited, 30 CPR (3d) 293 at 298 (FCTD).

[8]        The presence of an evidential burden on the opponents with respect to a particular issue means that in order for the issue to be considered at all, there must be sufficient evidence from which it could reasonably be concluded that the facts alleged to support that issue exist.

[10]      The opposition to the mark BOBOV is rejected. This decision has been made pursuant to a delegation of authority under s.63(3) of the Trade-marks Act.

Bobov 48 bans baby carriages on Shabbat because it holds the the Brooklyn eruv is not kosher, Bobov 45 bans smartphones, and Bobov Monsey's attempt to trademark the name Bobov in Canada to keep competing Bobov groups from using it fails.