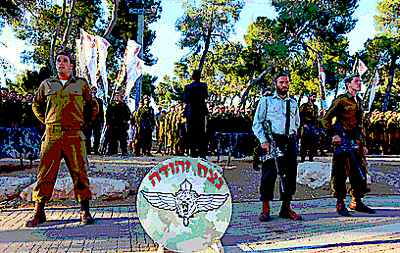 Nahal Haredi Cofounder Says He Will Walk Away From Haredi Brigade If Haredim Are Forced To Serve In The IDF, Tells Haredi Parents Not To Allow Their Children To Enlist
Shmarya Rosenberg • FailedMessiah.com

Schwartz is a cofounder of the Netzach Yehuda IDF brigade (commonly known as Nachal Hareidi) and one of its current rabbis.

“If this assault [the government’s attempt to force haredim to serve in the IDF by removing most haredi draft exemptions and by criminalizing haredi draft dodging] continues, will the rabbi end his involvement with Nachal Hareidi?” the interviewer reportedly asked Schwartz.

You might think a haredi rabbi who cofounded what was supposed to be a haredi IDF brigade would have some particular loyalty to it and to the IDF. But not Schwartz.

“It’s not that I will end my involvement – everyone will end their involvement. Nobody will enlist. There will be no more Shachar Kachol [a “haredi” IDF program], no Netzach Yehuda, nothing.

“The military has realized that if it wants to enlist hareidi men, it has to give them what they need in terms of religious observance. With Netzach Yehuda, the army has met all of the conditions for the past 14 years. As long as it’s under the supervision of rabbis and it’s possible to keep Torah and mitzvot, you have [haredi] enlistment.

“If that’s not there – it’s over. Nobody will dare to enlist…

“If [haredi] parents were to ask me, I would tell them to wait for now [i.e., do not allow their children to enlist] until it becomes clear whether the state wants to be a true partner to all of its citizens, or to compel its citizens using force.

“If it wants to compel its citizens with force – we [haredim] won’t be there,” Schwartz reportedly said.

Only a tiny number of haredim actually serve in the IDF, despite 14 years of Nahal Haredi’s existence.

And the dirty little secret Schwartz and Likud political leaders don’t want you to know is that many of the soldiers in these “haredi” units are not haredim and never were haredim.

Right wing Zionist Orthodox yeshiva students. Others are ex-haredim. And many of the ex-haredim are “shabbabnikim,” “bums” who were expelled from or voluntarily left haredi yeshivas as young teens and who spent their days wandering the streets, committing crimes and doing drugs. Many other Nahal Haredi soldiers are ba’al teshuvas. And others are members of all these groups from the Diaspora.

The numbers are confidential, but informed observers are coming to believe that the number of actual Israeli haredi yeshiva students who have enlisted in Nahal Haredi might be smaller than the numbers of these other groups serving in it.

And there is no dispute that the overall number of all these Nahal Haredi soldiers, whatever their origin, is extremely small.