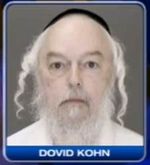 Dovid Kohn, who also goes by the name Avraham Pearl and whose actual background remains a mystery, abused the girl for four years when she was 12- to 15-years old. 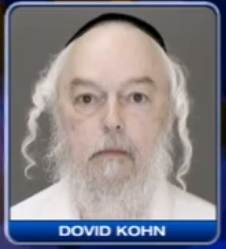 A 60-year-old Israeli haredi "mystery man" from Monsey, New York who sexually abused a haredi child over a four-year period, has been sentenced to eight years in prison, the Journal News reported.

Dovid Kohn, who also goes by the name Avraham Pearl and whose actual background remains a mystery, abused the girl for four years when she was 12- to 15-years old. She is now 21-years-old.

The girl was a friend of one of Kohn’s daughter at the time of the abuse.

Kohn threatened the girl then that she could never talk about what happened because the haredi community would view her as damaged goods and she would never married as a result.

She told the court she hopes her decision to press charges will encourage others in the haredi community who have been sexually abused to do the same.

Kohn, who was charged with 40 counts of abuse, pleaded guilty in January to one count of first-degree course of sexual conduct against a child, and admitted that he had oral sex with the girl when she was a child.

He could have been sentenced to 25 years in state prison.

Instead, prosecutors offered him a 10-year sentence as part of the plea deal.

But at his sentencing Tuesday, Kohn and his attorneys pleaded for a lighter prison sentence and Rockland County Court Judge William Nelson agreed, cutting Kohn’s prison sentence by 20%. Nelson also imposed a 10 years probation period to begin on Kohn’s release from prison. As is mandatory under the law, Kohn will also become a registered sex offender.

In concert with police, the victim spoke to Kohn about the abuse in person while wearing a concealed recording device and through telephone calls Ramapo police recorded.

At one point in those conversations the victim told Kohn that he had ruined her life. She said she cut herself and even tried to commit suicide as a result of the abuse.

Kohn claimed that he wanted to apologize to her and said that he didn’t want to hurt her.

But at the same time, Kohn accused her of trying to blackmail him by threatening to go to police if Kohn didn’t admit to the abuse.

Kohn told her that if she did that, he would “fight like hell” to win.

Kohn, who claims to be from Israel, has lived illegally in the US for more than a quarter-century, almost all of that time in Monsey.

Police are still not sure what Kohn’s true identity is or if he has a criminal history here or elsewhere under other names.

Dovid Kohn, who also goes by the name Avraham Pearl and whose actual background remains a mystery, abused the girl for four years when she was 12- to 15-years old.