The 'massive' haredi protest against Women of the Wall scheduled for 6:30 am this morning at the Kotel that was expected to draw thousands drew only several hundred haredi protesters, despite haredi leaders calls for mass attendance. 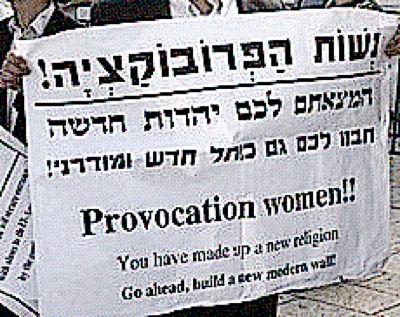 One the signs from today's haredi protest

Ha'aretz reports that the 'massive' haredi protest against Women of the Wall (Wow) scheduled for 6:30 am this morning at the Kotel that was expected to draw thousands of haredi protesters drew only several hundred haredi protesters, some of whom threw eggs as WoW's prayer service ended.

At last minute, just before WoW was about to travel to the Kotel under police protection due to previous haredi violence and threats and when the Jerusalem District Court was shuttered for Shabbat, police told WoW that reading from a Torah scroll at the Kotel by WoW would be a violation of law – even though the Jeusalem District Court's ruling clearly seems to mean that it is perfectly legal for WoW to do so.

Lacking a way to immediately appeal the police ruling, WoW gave in and agreed to postpone its Torah reading for another time.

Many of the haredi protesters held signs calling WoW "Provocation Women" and accusing WoW of making up a new religion.

"You have made up a new religion. Go ahead, build a new modern wall!" many of the haredi protest signs read.

Like the haredi women, the haredi men tried to disrupt Wow’s prayers by making a lot of noise – in this case by booing, jeering and hooting at WoW members.

Part of the women's section was roped off for WoW. Next to it, a group of haredi women – most elderly – screamed their own prayers out loud in an attempt to drown out WoW and confuse its members. The haredi strategy failed.

Last month, some of the thousands of haredi protesters at the Kotel rioted and tried to harm WoW members, who were protected by riot police. The riot was widely condemned across the political spectrum inside and outside Israel. To avoid more rioting this month, haredi leaders ordered unmarried yeshiva students and seminarians to stay home, and put the onus of the protest on married kollel students and working haredim, reducing the size of the haredi protest this month many times over.

The 'massive' haredi protest against Women of the Wall scheduled for 6:30 am this morning at the Kotel that was expected to draw thousands drew only several hundred haredi protesters, despite haredi leaders calls for mass attendance.