The volunteer work the ex-cons do for the campaigns – including the DA's campaign – will go toward their court-ordered community service requirements. 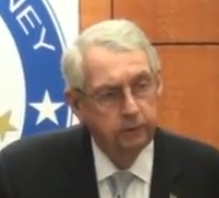 Campaign for Democrats and it will count as time served!

According to a Democratic district leader in Brooklyn, that is the message Kings County District Attorney Charles “Joe” Hynes and Kings County Democratic Party boss Frank Seddio are conveying in one assembly district to parolees seeking a way to fulfill community service.

“[The parolees] are participating in the campaigns across the 57th Assembly District,” said Renee Collymore, the Kings County Democratic Party treasurer and female leader in the district. “This includes all the [Brooklyn Democratic Party] endorsed candidates—[Bill] Thompson, Charles Hynes, Scott Stringer, Tish James and Eric Adams. They are door knocking, canvassing, leafleting, train stops and the like.”

Collymore, who said that parolees had also worked on her successful campaign last September for district leader, said that the volunteer work the ex-cons do on the campaigns will go toward their court-ordered community service requirements.

Collymore emphasized the parolees are also members of the Parliament Democratic Club, which she founded, and that though the initiative was her idea, both Hynes and Seddio had signed off on it. Hynes was particularly interested in the program, she said.

“The DA is aware and he appreciated my new program and wanted to team up with me in regards to that because we all know the DA has a long-standing reentry program called Com Alert. When he heard about it he offered to work alongside with me,” she said.…

Almost immediately after City and State NY asked Hynes' campaign for comment on Colymore's claims, Collymore texted City and State NY multiple times with messages including “I need City & State to hold off” and “Changes are being made.”

She then went on to deny that Hynes and Seddio approved the program, saying instead that she told some unnamed people in the Kings County Democratic Party about her program before implementing it.

Gene Russianoff, senior attorney for the New York Public Research Interest Group (NYPRIG), told City and State that there is nothing wrong with parolees participating in the political process, but there is a problem in this case of Hynes coercing subordinates work for particular campaigns, including his own.

The volunteer work the ex-cons do for the campaigns – including the DA's campaign – will go toward their court-ordered community service requirements.