The Evil Lead The Blind

On Monday, two Israeli haredi rabbis went on a mission to Bnei Brak to see 99-year-old haredi leader Aharon Leib Shteinman. Their goal? To make sure Sefardi haredi Chief Rabbi of Israel Shlomo Amar does not get a second term. 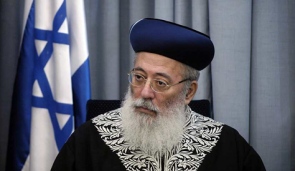 According to Yeshiva World, they told Shteinman that a pending deal between the Zionst Orthodox HaBayit HaYehudi party and the Sefardi haredi Shas party would put Amar in office for a second term and see Zionist Orthodox Rabbi Yaakov Ariel elected Ashkenazi chief rabbi. It would be the first time in two decades that a Zionist Orthodox rabbi would serve as chief rabbi.

But it was more than just that upsetting the two rabbis. Amar was too soft on conversions and too willing to work with Zionist Orthodox rabbis in the Diaspora. And Amar had removed one of these two rabbis from his job as a state religious court judge.

Shteinman did not need much convincing, though. He readily agreed Amar’s second term had to be quashed.

“Everything possible should be done to prevent Rabbi Amar from serving a second term,” Shteinman reportedly ordered.

Who are the two rabbis who lobbied Shteinman to block Amar’s second term?

Sitting on Israel’s high rabbinic court, Sherman – a former Zionist who was converted to haredism – voided all conversions done by the state’s conversion authority. He also voided other conversions years after they were supervised by Zionist Orthodox rabbis and struck terror into thousands of converts and their children.

But there is more – late last month, Israel Police Sherman recommended that Sherman be indicted for fraud. While sitting on a state rabbinic court he allegedly issued rulings favorable to a rabbinic court lawyer who was also representing Sherman’s daughter in her divorce, and he did so without following normal court procedure.

So what Shteinman did is rely on information given him by two men who rejected Zionist Orthodoxy and have spent years working against it. One of those men is, in essence, a felon who perverted justice and ruined lives.

And the haredi world’s supreme leader sees nothing wrong with any of this.

Posted at 07:20 AM in Haredim, Israel, Sefardim | Permalink

The Evil Lead The Blind

On Monday, two Israeli haredi rabbis went on a mission to Bnei Brak to see 99-year-old haredi leader Aharon Leib Shteinman. Their goal? To make sure Sefardi haredi Chief Rabbi of Israel Shlomo Amar does not get a second term.