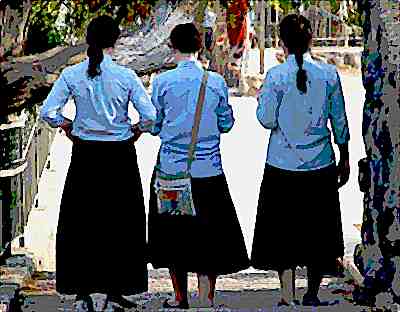 …[G]angs of men, rabbis, scholars of the Torah and interpreters of God and the Holy Scriptures - from the Haredi yeshivas to the Jewish homes - are teaching their daughters, not their sons, to cover themselves up completely. Because of what? Not from the scorching sun or the wrath of an angry God, but from men, so that, God forbid, they should not have what they call the "evil urge."

Therefore, those same rabbis of a nation, teachers of a generation and shepherds of the flock, hold a grave pedophilic outlook on life and on the world. This outlook sees young girls and adolescent females - every young girl and every adolescent female - as sexual objects in the eyes of grown men. This is pure pedophilia.

And that's not all. Instead of taking responsibility for their pedophilia, those faithful pedophiles are projecting their own pedophilia upon the young girls and teenagers who are the objects of their desire, forcing them to cover their bodies because they - the grown men - see every girl's lock of hair as a lewd object, and every milk tooth as something that arouses lust.

Those who believe and teach this pedophilia are not a fringe group. They are among us - they are rabbis, they are in our Knesset, they are some of our ministers and leaders. But their religious and institutionalized pedophilia is hardly discussed…

Niv is equally harsh about secular TV and newspaper ads he sees as sexually exploiting children:

…A baby girl who stands wiggling her diapered bottom on a diaper advert is portrayed as a sexual object - a prostitute, even. Strapping, grown men undress female dolls or flirt with underage models in adverts for clothing and cosmetics. Young girls and teenagers are portrayed as taking pleasure in consuming soft drinks, orally fixating on them and splashing them around. Even if they are pedophilia-lite, a substantial number of TV commercials encourage hard-core pedophilia…

Both…are pedophiles: those who wish to cover young girls up in the name of God; and those who expose girls before viewers in the name of profit. This social, cultural and institutionalized pedophilia must be eliminated.