« First They Came For Haredim, Next They Will Come For Us, Modern Orthodox Rabbi Says | Main | Sefardi Haredim Reportedly Agree To Government Education Demands » 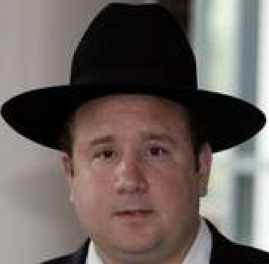 Kolko’s trial on the charges involving that one boy got underway last week, but Assistant Ocean County Prosecutor Laura Pierro told the judge that the defendant decided to plead guilty after learning that two more victims had come forward to authorities.

Pierro said she was contacted late Friday afternoon by a young woman who claimed she was victimized by Kolko, and the attorney for a young man who also claimed to be a victim.…

In exchange for Kolko’s guilty plea, the state would not proceed with additional charges related to the additional victims, but no other promises were made to him, Pierro said.…

Lakewood's rabbinical establishment and Brooklyn's Rabbi Yisroel Belsky tried to stop the victim and his family from pressing charges and caused horrible things to be done to them.

Belsky wrote a letter urging haredim to harass the victim and his family (English translation from Survivors for Justice): 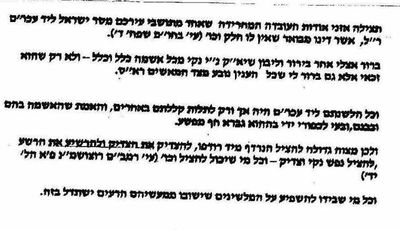 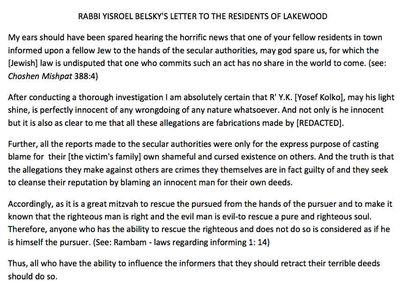 Rabbis issued a proclamation against the victim and his family: 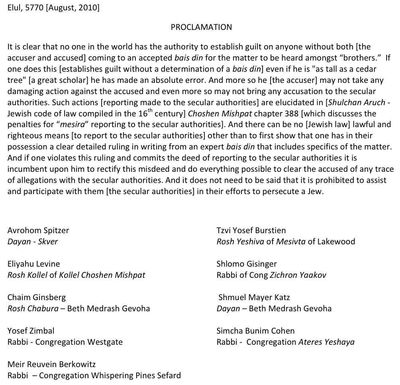 Belsky should be tried for obstruction of justice and so should these Lakewood rabbis, whose communities should ostracize them and remove them from their jobs.

But that won't happen.

Haredim let their rabbis get away with all types of evil, and prosecutors are far too reluctant to charge religious leaders than they should be.

Still, Belsky and these other rabbi-thugs belong in prison, and it would be nice if law enforcement would finally put them there.