Rabbi Yisroel Belsky (right),the rosh yeshiva of Torah Vodaas and the OU's co-head posek (rabbi who decides cases of Jewish law), and other haredi rabbis have banned NYC Israel Parade due to… 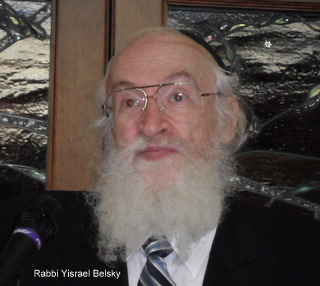 The following article was submitted to YWN by the writer, Alan Betsalel Friedlander. It has not been edited in any form by YWN, and presented in its entirety below:


The Celebrate Israel Parade is an event attended heavily by Modern Orthodox Jewish attendees. A group listed only by its initials as a participant in this year’s parade participants list actually has a hidden agenda. In a brazen attempt to force Orthodox Jews to accept their way of life at the Torah’s expense, the understanding that was maintained for two decades has been overturned, without asking for Rabbinic authorization.


In the 1990′s Rabbi Aharon Soloveichik, Zt”l (OBM), protested against showing tolerance toward homosexuals as a public marching group at the Celebrate Israel Parade. Up until last year, his advice had been heeded. Avi Goldstein brought this to the attention of the community this year and so many leading Rabbis have signed a letter that proclaims:


”Any participation in any event that includes so called “Orthodox” groups, who in any way condone or support toevah (abomination), or a deviant way of life, is asur (forbidden). Whoever is a participant or spectator is an assistant to a sinful matter. Such a brazen public chilul HaShem (desecration of the Divine Name) needs to be denounced.


Co-Signatory Rabbi Yehuda Sheinkopf said the following: “We could not let this group march under a banner of Orthodoxy without a response that this is not Orthodoxy, is it contrary to the Torah. These rabbis feel that it must be known that to join with such a group is assisting their agenda which is contrary to the Torah.”


Rabbi Yisroel Belsky gave a heter (leniency) if due to the short notice for someone who feels committed to the event what should they do so they can still attend without violating halacha. The answer was on condition that they protest the participation of the forbidden group(s).


Due to the late nature of disclosure, this list of signatories (in alphabetical order) is still being populated even as this story goes to press. 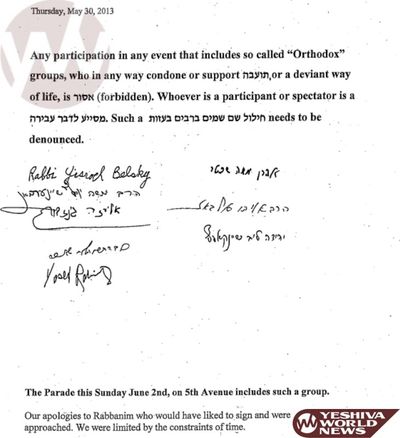 Posted at 12:33 PM in Haredim, Homophobia and its Discontents | Permalink

Rabbi Yisroel Belsky (right),the rosh yeshiva of Torah Vodaas and the OU's co-head posek (rabbi who decides cases of Jewish law), and other haredi rabbis have banned NYC Israel Parade due to…