The heads of both the Reform and Conservative movements in Israel will demand that Israel’s attorney general to investigate the role rabbis employed by the government may have played in Friday’s riot against Women of the Wall at the Kotel (Western Wall) in Jerusalem’s Old City. 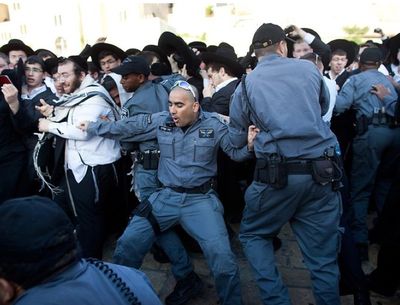 Riot police struggle to hold back a mob of haredim who are trying to physically attack Women of the Wall Members at the Kotel Friday morning May 10, 2013.

The heads of both the Reform and Conservative movements in Israel will demand that Israel’s attorney general to investigate the role rabbis employed by the government may have played in Friday’s riot against Women of the Wall at the Kotel (Western Wall) in Jerusalem’s Old City, Ha’aretz reported.

Friday morning, thousands of haredi demonstrators – many of them seminary and yeshiva students bused in especially for the protest – jeered at the women and screamed slurs and insults at them as they prayed. They threw water bottles, chairs, coffee, garbage and other objects at the Women of the Wall group, and stoned their bus when it left.

Riot police had to form a human chain to keep the increasingly violent haredim from physically attacking the Women of the Wall group.

Five haredim were arrested – although that number easily could have been exponentially higher if police had been prepared to make mass arrests.

Haredi activist leaders promised to make a much larger protest next month if Women of the Wall is allowed to pray openly with tefillin, tallits and/or a Torah reading, and they made no promises to keep that protest nonviolent. Instead, they blamed Friday’s violence on the “provocations” of Women of the Wall and on the presence of the police needed to protect them.

“I think it is very clear today who came to worship and who came to create provocations. The troubling aspect of it all is that the rabbi of the Western Wall and his team, all public officials, were deeply involved in organizing this haredi protest. We intend to address the matter with the attorney general and have him investigate,” Rabbi Gilad Kariv, the executive director of the Israel Movement for Reform and Progressive Judaism in Israel, told Haaretz.

Rabinovitch denied the allegations. He called the allegations that he was involved in planning the riots incitement by Women of the Wall. Instead, Rabinovitch claimed, he spoke with haredi leader Rabbi Aharon Leib Shtenman earlier in the week to try to achieve calm.

"I asked that rabbis and [haredi] Knesset members don't come here. I feel terrible for what happened here. I did not wish for it, did not expect it and I hope it will not repeat itself,” Rabinovitch, who has been a force behind much of the increasing haredization of the Kotel over the past decade, claimed.

"I wish everybody would regain self-control and find the way to restore what was, that how the Attorney General interpreted the rulings of the High Court will continue," Rabinovitch said, referring to the rules that bar women from wearing tallits (prayer shawls), tefillin (phylacteries), and reading from the Torah at the Kotel.

Religious Affairs Minister Naftali Bennett said earlier this week that he plans to draft new regulations for prayer at the Kotel in response to the Jerusalem District Court’s stunning ruling that it is not a violation of local custom for women to wear tallits and tefillin or to pray out loud – including reading from a Torah scroll – at the Kotel.

“If what he means is unilateral legislation, then we have no intention whatsoever of continuing to participate in this dialogue around finding a solution to the controversy over prayer at the wall,” Kariv said.

“If Bennett’s intention is to provide a very narrow interpretation of the court ruling, it will turn the whole compromise into an empty vessel,” Hess reportedly said.

The heads of both the Reform and Conservative movements in Israel will demand that Israel’s attorney general to investigate the role rabbis employed by the government may have played in Friday’s riot against Women of the Wall at the Kotel (Western Wall) in Jerusalem’s Old City.