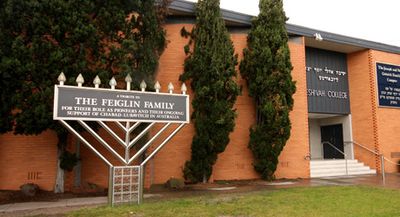 The epicenter of the child sexual abuse scandal in the Australian Jewish community, Chabad's Yeshivah Centre in Melbourne.

The Jewish organisation that has been established to end the silence on child sexual abuse within the Jewish community, Tzedek – which means ‘Justice’ in Hebrew – has made an application to appear at the Royal Commission into child abuse.

Manny Waks, founder and CEO of Tzedek and well-known human rights campaigner in the Jewish community has enlisted the help of Maurice Blackburn principal and Tzedek President Josh Bornstein, and will apply for leave to appear at the Royal Commission.

Maurice Blackburn is working with a legal team that also includes Victorian barrister, Daniel Star, Anton Hermann from Minter Ellison and lawyer Joel Vernon, who is also Secretary on the Tzedek board.

Mr Waks established Tzedek in December 2012 as the first organisation in Australia dedicated to the issue of child sexual abuse within the Jewish community. In 2011, Mr Waks publicly disclosed that he had suffered child sexual abuse, making the brave decision to tell his story in a bid to help others speak up and break the cycle of silence.

“The Jewish community has been exposed to numerous cases involving serious allegations of child sexual abuse and subsequent cover-ups and I believed the rapid developments that have happened here in Australia demanded an organisation such as Tzedek to properly respond to the issue in our community,” Mr Waks said.

“I strongly encourage all Jewish victims to reach out to Tzedek for advice and to better inform our submission to the Royal Commission.”

Both Mr Bornstein and Mr Waks separately campaigned for the establishment of the Royal Commission and in the course of doing so, met for the first time and agreed to collaborate on establishing Tzedek.

Mr Bornstein said Maurice Blackburn will work with Tzedek in assisting the Commission with its terms of reference, in line with an ongoing belief that the Commission should leave no stone unturned in addressing the issue of protecting children.

“I applaud the courage and conviction of Manny Waks in taking decisive steps to try and reduce child sexual abuse within the Jewish community, and to radically improve the way in which Jewish organisations respond to such cases,” he said.

“Like many others in the community, I believe that the Royal Commission is an extraordinarily important part of the process of changing institutional behaviour and giving victims a voice.”