The IDF’s haredi Netzah Yehuda Battalion cancelled its swearing-in ceremony originally scheduled to take place today on Ammunition Hill in Jerusalem after receiving information that haredi “zealots” would attempt to disrupt the event. 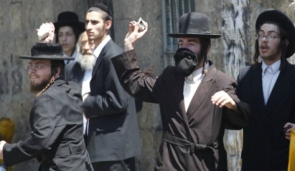 Instead, the new recruits will be sworn in at their military base. Family and friends – some of whom flew in from overseas specially to be at the ceremony – will not be allowed to attend.

"We can call the police, and of course we can disperse them, but we do not want to cause a war and hatred between brothers because of a swearing-in ceremony. We are here for them as well, even if they do not realize it, and it is our duty to prevent unnecessary clashes,” the battalion’s commander reportedly said.

"We were prepared and very excited. Suddenly, just hours before the ceremony, we were told it's been called off. We understand, and we are not angry, but it's frustrating," one recruit told Ynet.

Another Netzah Yehuda Battalion soldier said the decision to cancel the Jerusalem ceremony, "may be interpreted as a capitulation to the haredi street…a solution could have been found so that the haredi soldiers would also absorb the symbolism and historic importance of Ammunition Hill,” he reportedly said.

During 1967’s Six Day War, Israel needed to capture Ammunition Hill and the fortified Jordanian Police Training School there so it could gain access to Mount Scopus and the Jerusalem-Ramallah Road, and its capture was also instrumental allowing Israel to liberate the Old City.

The battle was one of the bloodiest of the war. In four short hours, 36 paratroopers gave their lives. But in the end, Ammunition Hill was liberated, and from there the IDF eventually liberated Mount Scopus and the Old City – including the Temple Mount and theh Kotel (Western Wall).

After the war, Ammunition Hill was turned into a national memorial for the soldiers who fell in the battle for Jerusalem.

Posted at 06:27 AM in Crime, Litigation, etc., Haredim, Israel | Permalink

The IDF’s haredi Netzah Yehuda Battalion cancelled its swearing-in ceremony originally scheduled to take place today on Ammunition Hill in Jerusalem after receiving information that haredi “zealots” would attempt to disrupt the event.