Haredim Unequipped For Army And Work

"Like many of my friends, I'd be happy to work if I knew someone would hire me. But at age 28 with four children, I'm afraid to leave the kollel and begin professional training. What if nobody hires me? How will I make ends meet?" 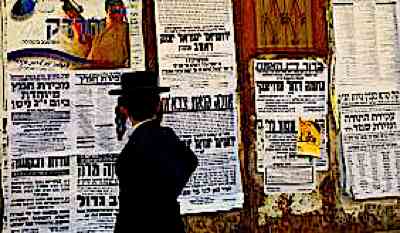 …Yossi, 28, is a married ultra-Orthodox man with four children. He is studying full-time at a kollel, a yeshiva for married men, and gets by on a monthly stipend of NIS 2,000 from the kollel.

"Secular people ignore the wage figures: 51% of Haredim make less than NIS 5,000 a month as opposed to 25% of the secular population, according to the Central Bureau of Statistics," he wrote us. "Like many of my friends, I'd be happy to work if I knew someone would hire me. But at age 28 with four children, I'm afraid to leave the kollel and begin professional training. What if nobody hires me? How will I make ends meet?"

Accordingly, Yossi wrote that most Haredim who work for a living are, paradoxically, the more financially secure ones, since they're the ones who can take a chance and plunge into the labor market.

Yossi's fears were also reflected in a government survey examining the fate of 11,000 yeshiva scholars 28 and above who received their final exemption from military service a year and a half ago. Only 10% began working, mostly in jobs in the Haredi world and only at low wages, while 90% stayed in yeshivas, even though military obligations no longer barred them from working.

For decades the state exempted Haredim from serving in the military and forced them to remain at yeshivas all day. This process has produced generations of Haredim living in poverty with no practical education or access to society and the labor market. It's naïve to expect that this could be reversed by setting arbitrary quotas.

It's not just that Haredim are unwilling to serve in the army and work, they face barriers preventing them from integrating into society after decades of confinement to the ghettos of poverty.

The state is now taking down the ghetto walls: Just 1,800 Haredim will be able to stay in yeshivas while the rest will have to serve in the army. Their main sources of livelihood – kollel stipends, child allowances and discounted local taxes and day care – will be lifted. Budgets for Haredi schools also face deep cuts, along with requirements that they teach core subjects.

All this is occurring as the ultra-Orthodox remain unprepared for an encounter with secular society; they lack the most basic skills for either the army or the labor market. It's no wonder the Haredim are terrified, convinced that they face an existential threat.

It's hard to see how causing panic helps integrate the ultra-Orthodox into society. The Haredi lifestyle requires change, but we mustn't forget that Haredim are people – people with many children. Haredi families going hungry – after their parents refuse to be forced into the army or can't adapt to the labor market – doesn’t serve anyone.

That's why those seeking a compromise have warned that army quotas are doomed to failure. They say the state can't choose gifted students on its own while the Haredim, who view the caps on exemptions as a threat to their autonomy, won't cooperate and make the choice themselves. Instead of capping the number of exemptions, most proposals talk about encouraging the Haredim to enter the army and labor force via financial incentives.

That's also why, along with pressure on the Haredim to join the army and labor market, the state must give them all kinds of assistance: vocational training, help in completing their educations, help in finding jobs, and allowances for supporting the working poor. Also, secular employers must be encouraged to hire Haredim.

We need these steps to let the ultra-Orthodox escape the ghetto unscathed, and we must consider easing steps like paring budgets for Haredi schools. This can be done gradually over a number of years.

This doesn't mean we have to give up on equally sharing the burden. We just need more patience, mutual understanding and reasoning. That approach will help everyone.

Arlosoroff is correct, I think, in, most of her analysis, but she misses a key point that so skews her analysis that it becomes false.

The rabbis also blocked haredim from enlisting in haredi army units – which are filled (so to speak) today with many haredim who were booted out of yeshivas for behavioral issues or who walked out on their own because yeshiva study bored them or was too difficult for them. Other in those units are ba'al teshuvas and new immigrants. There are even right wing Zionist Orthodox enlisted in those units

As a price for joining government coalitions, haredi rabbis demanded that all haredi yeshiva students be exempt from the military draft. They also demanded their schools be allowed to refuse to teach the core curriculum yet still receive state funding.

The politicians who acquiesced to these demands were wrong, but so were the men who made them. Any proposed solutions to the problems of haredi military service, haredi education, and haredi participation in the workforce must both acknowledge this fact and overcome it.

Posted at 08:50 AM in Haredim, Israel, Religion, Religion & State | Permalink

Haredim Unequipped For Army And Work

"Like many of my friends, I'd be happy to work if I knew someone would hire me. But at age 28 with four children, I'm afraid to leave the kollel and begin professional training. What if nobody hires me? How will I make ends meet?"