« Is This Ruling Against Oral Sex Real? Or Is It The Best Parody Ever? | Main | The Creeping Jewish Fundamentalism in Our Midst »

A haredi nursing student was kicked out of a nursing school linked to Laniado Hospital in Netanya and the Sanz hasidic dynasty because she had a crisis of religious faith. 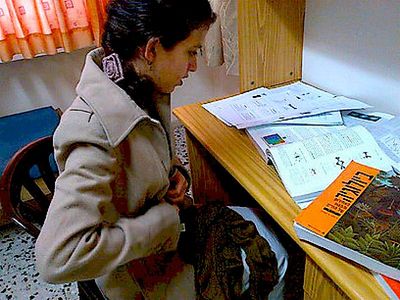 A haredi nursing student was kicked out of a nursing school linked to Laniado Hospital in Netanya and the Sanz hasidic dynasty because she had a crisis of religious faith, Ynet reports.

Twenty-two-year-old Chavi Laufer was expelled from Tessler Netanya. She lost all her credits earned for the year and had to register at another nursing school and pay all over again to take the same required courses, because Tessler refused to give her the credit she earned.

The school discovered that Laufer’s faith in Orthodox Judaism was waning when a fellow student told a dorm mother about it.

When called to a meeting with senior school administrators, Laufer admitted the truth.

"They were interested in my faith, and I told frankly that I have problems with it. Could lie, but I chose not to. Told them that for the shirt and hair I'll watch it - and I have also mentioned that I was always careful. But they said that's what really interests them,” Laufer told Ynet.

The school responded to Laufer’s admission by requiring Laufer to sign a special modesty pledge over and above the normal modesty pledge every student, including Laufer, signed before being admitted. That special pledge just for Laufer in part mandated her to be silent about any spiritual doubts she might have. She was also required to wear her hair pulled back in a pony tail rather than loose, and she was required to refrain from wearing polo/golf-type blouses.

Laufer asked for a copy of her special modesty agreement with the school.

Then she asked for the minutes of her meeting with administrators.

The also refused that request.

"They told me specifically that they were afraid that I would use it to sue them,” she reportedly said.

Laufer was also ordered to see a local haredi psychologist and asked to sign a a release that would allow that psychologist to share every detail of their therapy sessions with school administrators.

Laufer refused to sign the release but (apparently) did see the psychologist.

The school let her stay anyway, but brought in a visiting rabbi, Rabbi Yitzhak Fanger, to discuss issues of spiritual doubts with the students.

Laufer asked administrators if she was allowed to participate in that discussion and ask questions.

Administrators gave her permission and told her that they had arranged for that rabbi to speak specifically for her to do so.

"Since they forbade me to speak publicly about these matters, I went to the principal and asked her if I could ask him questions, or it should not. She answered me that I can ask whatever I want, and that's why she brought him,” Laufer reportedly said.

"I told her that she herself told me to ask the questions, and that I'm following all the new rules they set for me. The director admitted it was true, but said that she still does not approve of me continuing to learn [in the school], and said that she requires me to leave school immediately.…”

Laufer protested that she had upheld the school’s special modesty agreement with her, and noted that she only discussed matters of faith with the rabbi after asking school administrators for permission.

The school booted her out anyway.

"I had to actually learn a whole year again - and not work [like I had planned].…A rabbi in Jerusalem I have a connection with was in touch with the school. He tried to talk to them and tell them I was not a threat, but they did not listen…I’m definitely considering suing. They did something illegal and unjust…I can not be responsible for what I feel. They can not force [me or anyone else to] believe…If [the situation] were reversed, all haredim would be outraged and angry. [Tessler Nursing School] did something illegal, and they should be held to account [for it]. I am a student, I have no money, and such payment for courses and [loss of immediate] learning capacity…it is a real blow,” Laufer, who now studies at Laufer now studies in the School of Nursing at Shaare Zedek Medical Center in Jerusalem, told Ynet.

“[Our] nursing school is unique, and the students are aware of the conditions required by the school. They know [if their outlook] does not match the conditions - there are enough other institutions where they can learn,” Tessler’s spokesperson reportedly said.

Israel’s Ministry of Health, which was under haredi control when then this incident happened, issued a statement which somewhat supports Laufer but offered her no aid or redress.

“… In the event that we would have known about [the Laufer expulsion] in real time, we would have not agreed with [it]. The Ministry of Health is strongly opposed to discrimination of any kind. [However,] since in the past [few] months the lady fit in at Shaarei Tzedek’s [nursing] school, we wish her ​​luck in her future endeavors,” the ministry’s statement reportedly said.

A haredi nursing student was kicked out of a nursing school linked to Laniado Hospital in Netanya and the Sanz hasidic dynasty because she had a crisis of religious faith.