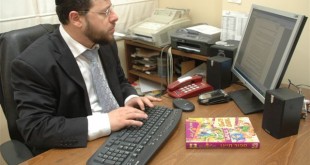 Written by the paper’s former editor, Chaim Walder, who is now a regular columnist, the column says that what Lapid is doing now by cutting government support of haredi schools that refuse to teach the country’s core curriculum and by his demand that haredi yeshiva students be drafted into the military resembles what Hitler did to the Jews in the Holocaust.

"Why do they hate us, why despise us, why is it that in all the surveys haredim are the most hated, why is it that Yair Lapid[’s party] got any - so many [Knesset] seats in January’s election?”

Walder then quotes Adolph Hitler for his answer.

“We will have to solve the Jewish question. [We must cause the Jews to abandon] the notion that the Creator of the World chose the Jews, and therefore it is their right to be parasites that feed on the bodies of other productive citizens. Jews must adapt to real and productive work just as other citizens do, if not, we will sooner or later face a crisis whose dimensions are immeasurable. If the Jewish money and power continues in Europe or elsewhere - it will lead to civil war, then the result will not be the victory of Jewry, but the destruction of the Jews across Europe,” Walder wrote.

Walder does qualifies his comments a little, saying that the intent of Lapid and his allies is "not to physically destroy haredim.”

Instead, Walder wrote that Lapid and his allies want to destroy haredim in other ways through other means.

“[Lapid and his allies] have malicious intent when it comes to quality of life, ability to lead a normal life and in giving us basic rights, such as allowances, discounts, property tax, income support, food for the children, after-school programs, day care centers, education - there are even those who speak of taking away our freedom to vote, or of forcing us to leave Israel. [Lapid’s policies are] dictatorship at its best.”

Walder then cited a column Lapid wrote two years ago to defend his comparison of Lapid and Hitler.

"Forget ideology, forget about that I do not understand how it does not bother you [haredim] that you that you live at my expense, but I do not have the ability to pay for it all.…Not only for your kids but I have to give to my children, too. Do you realize how it makes me feel? We must find a way, my [haredi] friend, or it will end badly. What does it say in [Megillat] Ta’anit: Friendship or death,” Lapid allegedly wrote.

"Now tell you tell me what the difference is [between Lapid and Hitler] in that final sentence?" Walder asked.