"The only thing they didn't do [yet] is walk [Christopher St. Lawrence and other town leaders] out with [hand]cuffs [on]. I've been waiting for this for 10 years. Maybe there is a God." 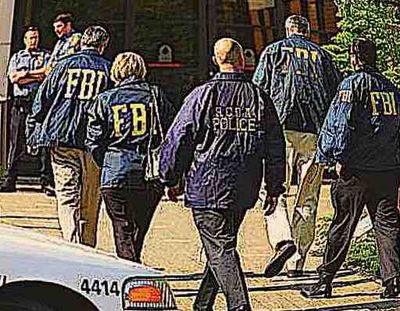 Just before 4:00 pm Wednesday, dozens of FBI agents swarmed into the Ramapo, New York town hall, ordering out all but a handful of employees and seizing documents and hard drives. After eight hours of searching and collecting evidence, the agents left just before midnight.

A law enforcement source with knowledge of the investigation reportedly told Newsday that some of the records the FBI seized are documents related to Provident Bank ballpark and the development corporation that runs it.

Joe Meyers (D-Suffern) spoke to reporters outside the town hall as the FBI agents were inside. Newsday reported that Meyers said that he and unnamed others have been in regular contact with FBI agents about alleged corruption in the Ramapo government.

"Where it leads, whether it's the stadium, or whether it's other things that the FBI was given information about, is anybody's guess at this point, but I think the stadium is certainly a possibility," Meyers reportedly said.

Ramapo town attorney Michael Klein declined to tell media what town departments the FBI records were taken from. But he did say that the records seized dated back about two or three years.

"The FBI wanted to review a limited category of records. We provided them everything they asked for. They refused to discuss the nature of the investigation. They didn't interview anyone. They didn't (say) if anyone was the target of any investigation and that's as much as we know,” Klein reportedly said.

"It was very chaotic. [FBI agents] told everyone to step away from their computers, so that's what we did,” an unnamed town employee reportedly said.

Ramapo police guarded the rear entrances to the building. The front doors were locked.

Ramapo Supervisor Christopher St. Lawrence remained in the building until after the raid was completed. The blinds to his office were reportedly closed for hours after the raid began.

A law enforcement source told Newsday that town records were seized in a raid rather than subpoenaed because of the fear that the documents and computer drives would be destroyed if the federal government relied on subpoenas to get them.

Since last month’s arrests of six leaders in a corruption sting set up by haredi scammer Satmar hasid Moses Stern, Ramapo residents reportedly told Newsday that FBI agents had come to their homes to interview them about the town's politics and government.

"We are hoping for justice finally in the Town of Ramapo and we're looking forward to seeing what evidence is out there," Peggy Hatton, an activist has long opposed St. Lawrence and the scandal-plagued haredi-controlled East Ramapo school board, reportedly said.

St. Lawrence reportedly abruptly hung up the phone when a reporter called him during the raid.

Mike Castellucio of the activist group Preserve Ramapo said he had spoken with FBI agents and given them information before the raid, but still didn’t know exactly what agents were looking for in the raid. Nevertheless, Castellucio was ecstatic.

"The only thing they didn't do is walk [St. Lawrence and other town leaders] out with cuffs. I've been waiting for this for 10 years. Maybe there is a God,” he reportedly said.

"The only thing they didn't do [yet] is walk [Christopher St. Lawrence and other town leaders] out with [hand]cuffs [on]. I've been waiting for this for 10 years. Maybe there is a God."