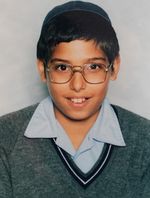 "…At that time, I cannot recall any other dark-skinned members of the Yeshivah (Chabad) community. We were it. We were different. And to a community in which yichus (lineage – in this context, preferably a Chabad ancestry) is such a central concept, boy did they let us know. Immediately upon our arrival, still very visibly Israeli, we were referred to as “DIBs” (Dirty Israeli Bastards) and monkeys. Other profanities were constantly thrown our way. Then it became physical.…we were bullied, vilified and beaten.…The abuse was carried out by kids our own age and kids who were much older.…" 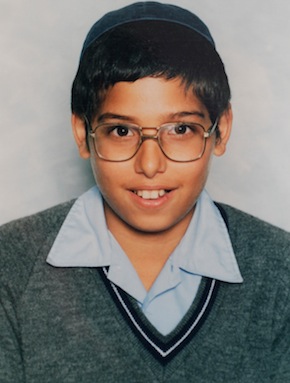 Manny Waks as a child

Recently I wrote the post below. For a number of reasons I have refrained from posting it. In light of the racism developments over the past 24 hours, I have chosen to post it here tonight in tribute to Adam Goodes:

Interestingly, some from within the Yeshivah community claim that my motivation in launching the ongoing public anti-child sexual abuse campaign is motivated by some anti-Yeshivah agenda and jump at every opportunity to question my motives. I’m resigned to the fact that no matter what I say or do, those within the Yeshivah community who feel that this is indeed an anti-Yeshivah crusade will never be convinced otherwise.

Let me be clear, my motivation for my public campaign is for the sake of justice, accountability and to ensure attitudes and actions are changed in order to prevent a repeat of what has happened in this community (and many other like communities) for decades. I believe that anyone who knows this community well and has a reliable moral compass will understand the need for change, and will be able to recognise the pivotal work that is in fact being done now.

Growing up in a Chabad (ultra-Orthodox) community was a privilege in so many ways, as David Lerner writes in his excellent piece (http://www.unpious.com/2012/12/the-weberman-trial-or-the-wolf-who-cried-bias/). I too, although I have chosen not to be a member of this community any longer, feel close to it, understand its inner workings deeply, and will always, maintain a strong love for it. Perhaps that is the reason that I care so much, because as David Lerner puts it, they ‘are our sisters, our brothers, our friends’.

I also care because I was taught to love my fellow Jew, and not to stand idly by when I witness injustices. Perhaps also because where I see hypocrisy and action/inaction which detrimentally impacts the innocent, I believe it is my responsibility to speak up.

This is what I was taught, but this is not what I witnessed in my community as I was growing up.

In this context I will share another personal story from my childhood, growing up in a new country and a new community.

By now you’re aware of the sexual abuse I suffered at the hands of two separate perpetrators. You’d also be aware of the many other cases of child sexual abuse in this community (and the many other stories that are yet to be revealed), the ongoing cover-ups and the regrettable attitude by some within Yeshivah, including some within its leadership.

Last year I was humbled to have been asked to join other global leaders to write a chapter for a prestigious book entitled ‘The Book of Faith’, which is due to be published in the next year or so. Recent developments have prompted me to post a short but important paragraph from my draft:

‘Similarly, due to the colour of our skin, my family’s experience of ongoing outright racism targeting us children, including through the use of violence, by numerous members of the Habad community would also have impacted my attitude towards my faith.’

I was born in Israel in 1976 to a mother of Yemenite descent and an Australian-born (Ashkenazi) father who was a ba’al-teshuvah (a person who embraces Orthodox Judaism later in life). I arrived in Sydney, my dad’s hometown, with my parents and seven siblings in 1984 (at the age of seven). About 18 months later we relocated to Melbourne for my dad’s work. Along the way more children were born and there are now seventeen of us.

At that time, I cannot recall any other dark-skinned members of the Yeshivah (Chabad) community. We were it. We were different. And to a community in which yichus (lineage – in this context, preferably a Chabad ancestry) is such a central concept, boy did they let us know.

Immediately upon our arrival, still very visibly Israeli, we were referred to as “DIBs” (Dirty Israeli Bastards) and monkeys. Other profanities were constantly thrown our way. Then it became physical. I was the oldest boy with five boys immediately after me. I would have been around 9-10 years old. I vividly recall that each and every weekend on Sabbath afternoon – ironically in between and during the prayer services – we were bullied, vilified and beaten. In one particular and shocking incident, I recall that one of my younger siblings was thrown into a rubbish bin. The abuse was carried out by kids our own age and kids who were much older.

At one point we decided enough was enough and started standing up for ourselves.

Lest you think that only children were involved, I can assure you that many adults were aware of this open racism. In fact, some outrightly participated. One shocking incident has never escaped my mind. One of my younger siblings responded to the ongoing racism by fighting back and ultimately hurting a child. This child’s father, a prominent member of the Yeshivah community, grabbed my brother who was standing fairly close to me, and physically flung him over several meters to the side entrance of Yeshivah, where what I would describe as a mob was standing beneath the stairs. The father, red in the face from anger and still holding my small, defenceless brother by the scruff of the neck while shaking him, was yelling profanities about our family. I was watching all of this unfold from the side. I was mortified. I was angry. No one intervened. Not any children. Not any adults. Rather, the response was a continuous war cry against my family.

I recall subsequently sharing this incident with my dad who was inside the synagogue praying. It was later that evening that for the first time ever I witnessed my dad crying. He called my mum into a private section of our house and, as the oldest boy, he asked me to join them. In tears, we conveyed to my mother what had transpired that afternoon. My parents were aware of what was happening each weekend but this was breaking point. It was devastating to say the least. After this incident, my dad approached Rabbi Groner to try to take the person to a Din Torah (Jewish Court) but apparently Rabbi Groner refused to do anything.

At some stage, our post-army cousin came to visit us from Israel. I recall one incident in which he physically responded to a physical assault on one of my siblings. His presence and reaction gave us the additional confidence we needed to respond. Which we did, and soon after, the physical assaults stopped. Ultimately, the verbal abuse also stopped.

Years later, in discussing these experiences with my mother, she shared with us her devastation at waiting at home (which is literally across the road from Yeshivah) every Sabbath afternoon for at least one of her kids to run back home crying with an injury (physical or otherwise) or with other hurtful information. She recollected how her stomach used to turn during those long afternoons.

One sibling recalls being referred to as a teacher’s “favourite Abo”. Another was repeatedly called an “Abo” by another adult member of the community. At least two younger siblings recently shared with me how they wished they were white due to the constant racial vilification.

I recognise that aspects of my childhood were tough, but there are children in far worse situations. Perhaps it’s the resilience in me that allows me to move forward confidently. Perhaps it’s also my experiences that contributed to my level of resilience.

While I am critical of many attitudes and practices within the ultra-Orthodox community, as I’ve repeatedly mentioned elsewhere, I also respect a lot of what they have done and continue to do for the Jewish community. However, in my opinion, the fundamental issue with the ultra-Orthodox community is that there is a refusal to accept the deep flaws that exist within this community. In this context, please see this very insightful and powerful presentation: http://www.youtube.com/watch?v=VVhtrHE6SjE&feature=youtu.be (I recommend watching the entire clip, however especially minutes 17-21 relate to this point).

Ultimately, the main point of this post is to highlight another deep-rooted flaw within this community in order to further instigate genuine self-reflection, which will hopefully lead to fundamental and sustainable changes. When a community chooses to preach, it must also practise that which it preaches. Fundamental religious principles taught in the ultra-Orthodox classrooms were, and are, all too frequently breached. Sadly, the hypocrisies are pervasive. It is time to ensure attitudes and actions are changed in order to prevent a repeat of what has transpired here and in other places, literally for decades. It is time to live by example. The disingenuous "holier than thou" attitude must cease immediately. That’s a good place to start.

"…At that time, I cannot recall any other dark-skinned members of the Yeshivah (Chabad) community. We were it. We were different. And to a community in which yichus (lineage – in this context, preferably a Chabad ancestry) is such a central concept, boy did they let us know. Immediately upon our arrival, still very visibly Israeli, we were referred to as “DIBs” (Dirty Israeli Bastards) and monkeys. Other profanities were constantly thrown our way. Then it became physical.…we were bullied, vilified and beaten.…The abuse was carried out by kids our own age and kids who were much older.…"