"It is clear to all of us that [the haredi rioters are] just a small number of protesters in comparison to the tens of thousands God fearing protesters. We have no control over the youth,” Pini Rosenberg, the protest's spokesperson reportedly said. 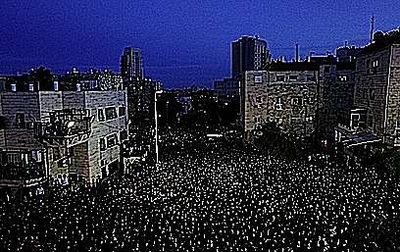 At least 30,000 haredim held a mass vigil tonight in front of the main IDF recruitment center in the Romema neighborhood of Jerusalem to protest the looming draft of haredi yeshiva students into the military or national civilian service.

But the supposed vigil – which was organized by the vehemently anti-Zionist haredi umbrella organization Edah Haredit and the most conservative of the non-hasidic haredi faction heads, Rabbi Shmuel Auerbach – quickly became a riot.

Media reports say that haredi rioters burned torched large garbage dumpsters and hurled rocks and other objects – including a smoke grenade and glass bottles – at police, journalists and at haredi IDF soldiers who staged a small counter-protest.

Police had to use water cannon to disperse the crowd.

At least ten police officers were injured, two of whom were hospitalized in moderate condition.

At least ten haredi rioters have been arrested so far.

“Tens of thousands are taking part in the haredi response to the Peri Committee [which is finalizing haredi draft legislation]. We say 'no' to the enlistment of yeshiva students, even if all of us will be forced to go to jail en masse. We have survived for 2,000 years and will survive this spiritual destruction as well.…It is clear to all of us that [the haredi rioters are] just a small number of protesters in comparison to the tens of thousands God fearing protesters. We have no control over the youth,” Pini Rosenberg, the protest's spokesperson, told Ynet.

"It would have been much calmer here if the police hadn't shown up at all. The stones were thrown by around 20 bored guys. Nonetheless it was blasphemous,” a 15-year-old haredi yeshiva student claimed.

A small group of secular anarchists joined the protest on the haredi side.

Border Patrol officers initially formed a human barrier between the rioters and the recruitment center.

"We will use a heavy hand against attempts to disturb the peace, and we will settle the score with anyone who tries to damage property or hurt anyone,” Jerusalem District Police Commander Yossi Prienti told media, including Ha’aretz, Thursday night.

The protest was dubbed “The Gathering of the Tens of Thousands" by Edah Haredit even though Edah Haredit’s permit only allowed 5,000 people to participate.

"Your participation in the gathering of the tens of thousands is the only alternative to saving our youth from the edict of enlistment!…The government's edicts threaten the future of the people of Israel in their entirety…this is the time to have resolve and prevent these edicts!!!" a pashkvil (large wall poster) promoting the protest reportedly said.

Edah Haredi rabbis, led by Rabbi Yitzhak Tuvia Weiss, also signed leaflets distributed in haredi neighborhoods ahead of the protest calling on haredim to go out and protest against the government which “seems determined to eliminate and abolish religion and Torah in Israel in every shape and form…,” Ha’aretz reported.

The only so-called mainstream haredi leader to participate in the protest was Rabbi Shmuel Auerbach, who lost his bid for leadership of non-hasidic haredim last year to haredi leader Rabbi Aharon Leib Shteinman.

Auerbach called on his followers to "gather and to defend ourselves as a bastion against this religious persecution that seeks to uproot the Torah from Israel, it shall not stand, neither shall it come to pass, the Torah will not be replaced, it is our lives and the length of our days. We will not rest nor be silent until with God's help all these harsh decrees will be cancelled,” Auerbach reportedly said.

Despite strongly opposing the draft, mainstream haredi leaders Rabbi Aharon Leib Steinman, Rabbi Ovadia Yosef, and the hasidic rebbes who are not members of Edah Haredit all refused to participate in the protest despite energetic attempts from Edah Haredit and Auerbach to draw them in.

Update 10:53 pm CDT – Finance Minister Yair Lapid reacted to the protest and riot during a video chat he held with Israelis Thursday night.

“It wont help them. Enlistment is not an edict. My son enlisted and I enlisted. You wanted us to fulfill our promises, we will make good on our promises. There will be an equal shouldering of the burden in Israel,” Lapid reportedly said.

"It is clear to all of us that [the haredi rioters are] just a small number of protesters in comparison to the tens of thousands God fearing protesters. We have no control over the youth,” Pini Rosenberg, the protest's spokesperson reportedly said.