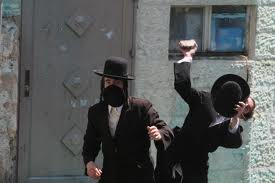 When firemen and EMS personnel responded to a blaze in Meah Shearim on Monday night the eve of 20 Iyar 5773 [i.e.m Monday evening April 29, 2013], they did not expect to have to defend themselves from attack. Despite the fact firefighters were responding to a blaze on Blecher Street, the sikrikim [staunchly anti-Zionist haredim linked to both Neturei Karta and the haredi umbrella group Eidah Haredit], whose yeshiva is located close to the fire, saw nothing wrong with pelting the life-savers with rocks, eggs and whatever they could grab at responders. An Israel Electric Company technician working on the scene was injured by one of the rocks.

Yassam commando police were quickly dispatched to the scene to protect responders as they worked to evacuate people from the fire area for fear of a building collapse.