"It is not about science, math, computers or English, but it is about Yair Lapid understanding it is the rabbonim [haredi rabbis], the Gedolei Yisrael Shlita [the leading haredi rabbis], who will dictate what the children learn, not Lapid, Piron or any other government.” 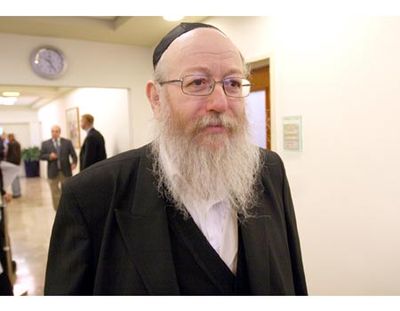 Lavi, playing devil’s advocate, questioned why learning English and obtaining basic skills in computers and mathematics is so objectionable to chareidim, for “it is not avoda zara”.

Litzman explained by highlighting the fact that one must understand “this is a gezeiras shmad” [i.e., a time when a foreign government is forcing Jews to convert to a foreign religion or give up Torah-true Judaism. In a time of shmad, even minor adaptions not normally prohibited by Jewish law become prohibited. – Shmarya, FailedMessiah.com] Litzman stated that for him, there is no doubt that this is not about teaching chareidi children subjects towards widening their knowledge base, but it is a concerted effort by haters of a chareidi lifestyle to compel a change, to distance the next generation from the lifestyle of the elders.

Litzman pointed out that today, 30-40% of elementary school children nationwide are chareidi, “and we are far from 40% of the population, so they get it. They are afraid of the demographic realities and this compels their actions.” Litzman explains he does not believe for a moment that Education Minister (Yesh Atid) Rabbi Shai Piron and Finance Minister (Yesh Atid) Yair Lapid are genuine, and he is absolutely certain their motives are to uproot the Torah lifestyle of the chareidi tzibur at large, a lifestyle they find objectionable and unacceptable.

Nevertheless, Lavi persisted, asking what it is so troubling for the chareidi student to acquire these skills and this knowledge, which ultimately will permit an easier transition into the workforce, facilitating one’s efforts towards earning a livelihood in the future.

Litzman made a number of points which in his viewpoint are at the heart of the dispute. For one thing, he asked rhetorically how can one rely on one rav for matters pertaining to Halacha, shabbos and kashrus for example, but the very same person is now expected to turn his back on this rav and accept an education that is contrary to the rav’s point of view. He explains “it is not about science, math, computers or English, but it is about Yair Lapid understanding it is the rabbonim [haredi rabbis], the Gedolei Yisrael Shlita [the leading haredi rabbis], who will dictate what the children learn, not Lapid, Piron or any other government.”

Litzman added in a time of shmad “we cannot accept any of their gezeiros”, further highlighting that today, the chareidim may not accept any ruling from elected officials pertaining to the education system no matter how benign it may appear.

Litzman feels that the threats of removing 50% of the state aid for schools that do not agree to introduce core subjects is just an excuse, pointing out the Finance Ministry already announced plans for major cuts to yeshivos and this is just a means to justify those cuts, nothing more.

Litzman categorically rejects any attempt to portray Lapid and his party in a legitimate light, absolutely convinced that Lapid is following in the footsteps of his late father and the education he was given, working to uproot Torah and the chareidi way of life.

"It is not about science, math, computers or English, but it is about Yair Lapid understanding it is the rabbonim [haredi rabbis], the Gedolei Yisrael Shlita [the leading haredi rabbis], who will dictate what the children learn, not Lapid, Piron or any other government.”