« Don't Worry, Jews May Be Bad But Goyyim Are Worse, Ohr Somayach Rabbi Says | Main | Israel Police Lie About Women Of The Wall In Court, Judge Doesn't Buy It »

Modern Orthodox Support For Women Of The Wall Grows

“I have a colleague at work who has known for years that I’m Orthodox, but last week, when I got back from the Women of the Wall service, she says to me, ‘But you’re Reform – right?’” 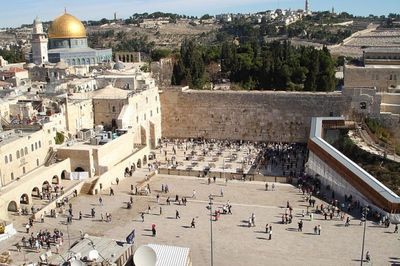 Writing in Ha'aretz, Judy Maltz highlights the Orthodox women who are part of or supportive of Women of the Wall, debunking, at least in part, the prevelant Israeli myth that Women of the Wall is part of the Reform Movement.

…Many Israelis would probably be surprised to learn that two of the eight board members at Women of the Wall are, in fact, Orthodox women, one of whom assumed her position just a week ago. Negotiations are now under way to bring another two on board.

Aliza Berger-Cohen, an Orthodox woman who has sat on the board for the past 10 years, finds it amusing that Israelis still can’t figure her out. “I have a colleague at work who has known for years that I’m Orthodox, but last week, when I got back from the Women of the Wall service, she says to me, ‘But you’re Reform – right?’”

It may also come as a surprise that a growing number of Orthodox women, particularly Orthodox feminists, have begun to rally behind Women of the Wall after many years of sitting on the fence, as evident in their relatively large presence at the most recent service.

“There is a strong contingency of Orthodox women who now feel it’s their duty to be in attendance with us,” says newly installed board member Leora Bechor, an Orthodox lawyer who grew up on Long Island.

Among the Orthodox participants at the Rosh Chodesh service held earlier this month, where five women were detained by police for wearing tallitot, Bechor says she recognized students from Yeshivat Talpiot, an egalitarian yeshiva in Jerusalem; members of Shira Chadasha, an Orthodox feminist congregation in Jerusalem; activists in the campaign for women’s rights in Beit Shemesh; faculty from the Pardes Institute of Jewish Studies; and representatives of Kolech, the Israeli Orthodox feminist organization.

Although Women of the Wall is widely associated with the Reform movement, it is very much based on an Orthodox model, says Elana Sztokman, the executive director of the Jewish Orthodox Feminist Alliance, an international organization based in New York.

“At its core, it is a woman’s prayer group,” she says. “Women’s prayer groups are an Orthodox invention. They’ve been around since the 1970s in the United States, and you find them in almost every major Orthodox community there. This is why JOFA has always been in favor of Women of the Wall.”…

[T]he Sharansky compromise does not make any accommodations for those women’s prayer groups that were the inspiration for Women of the Wall, notes Sztokman. “I’m fully supportive of egalitarian prayer,” she says, “but we need to make sure the needs of Orthodox women are also taken into account. That’s really important – that our needs not be forgotten.”

Hoffman, the Women of the Wall chairwoman, was quick to welcome Sharansky’s compromise plan. A bit too quick, however, for some of her Orthodox cohorts on the board, who can’t quite figure out what’s in it for them.

Orthodox women like herself, she explains, want to pray with other women, not with men, so allocating a space for egalitarian prayer does nothing to solve their current problems at the wall. “If we move over to the egalitarian section, we’d have to put a mechitza [separation barrier] around ourselves, and then that might offend other people there,” she says.

Neither is Bechor thrilled with the Sharansky plan, which she says does not address a major issue for Orthodox women. “For me, it’s not a solution,” she says. “As Orthodox women, all we are asking for is to give us on our space where we can feel comfortable 11 hours of the years – 11 and not 12 because we don’t hold our service on Rosh Hashanah.”…

Modern Orthodox Support For Women Of The Wall Grows

“I have a colleague at work who has known for years that I’m Orthodox, but last week, when I got back from the Women of the Wall service, she says to me, ‘But you’re Reform – right?’”