The USDA reportedly opens an investigation as a class action lawsuit against Doheny Glatt is launched by a member of the LA Jewish community. Doheny Glatt's owner also had a special relationship with Agriprocessors and Sholom Rubashkin. 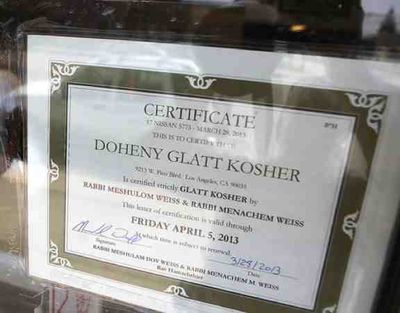 The Los Angeles Times is reporting that the USDA’s Food Safety and Inspection Service has launched an investigation into Doheny Glatt and the kosher meat scandal roiling the LA Jewish community.

Doheny was caught on tape last week bringing unsupervised meat into its distributorship. It was also caught with hundreds of allegedly counterfeit Aaron's Best labels and a label printer.

Despite last week's revelations, a Chabad rabbi, Meshullam Weiss, rushed to give Doheny temporary kosher supervision after the Rabbinical Council of California pulled its supervision. Weiss was joined by his son Menachem, a former Chabad emissary. Neither had seen the videotape but both had no problem giving Doheny supervision.

Additionally, a class action lawsuit has been launched against Doheny Glatt by a local member of the Jewish community, Joshua Fard.

And then we have this interesting tidbit from the Sholom Rubashkin bank fraud trial in 2009:

Michael Engelman, owner of the Doheny Kosher Meat Market in Los Angeles, denied any wrongdoing. But he acknowledged that he had offered "advance payments" for meat during his 20-year relationship with Agriprocessors Inc. in Postville.

The questions by defense attorney F. Montgomery Brown were an attempt to discredit Engelman as a witness in the government's financial fraud case against Rubashkin.

Engelman was one of six former customers of Agriprocessors, now Agri Star, who testified against Rubashkin on Monday.

Engelman told jurors that the most he ever owed the plant for meat at one time was $300,000 to $400,000. Prosecutors contend that Rubashkin falsified sales records to show that Doheny owed more than $1 million, in an attempt to defraud his plant's lender.

Brown later asked Engelman about the money sent to Agriprocessors.

"I understand what's going on here," Brown said, and accused Engelman of putting money in Agriprocessors "to avoid taxes."

"I filed my taxes every year," Engelman said.

Rubashkin, 49, faces 91 federal charges including mail, wire and bank fraud, money laundering and ignoring an order to pay livestock providers on time. He has pleaded not guilty.

Whether customers actually bought meat is a core issue of the federal bank fraud charges. Prosecutors allege that Rubashkin ordered an sales employee to draft invoices for transactions that never took place, which he then used to obtain cash advances from the plant's lender. Defense lawyers say the sales records were legitimate.

Brown's questioning took an unusual turn when a man in the public gallery started making a "timeout" gesture to Engelman.

Engelman asked for a break and left the room with the man, later identified as his accountant and lawyer, Yosef Y. Manela.

U.S. District Judge Linda Reade later asked Manela not to signal to his client while he testified. Minutes later, Manela mouthed the word "no" to his client and nodded while Brown continued his questions.…

The USDA reportedly opens an investigation as a class action lawsuit against Doheny Glatt is launched by a member of the LA Jewish community. Doheny Glatt's owner also had a special relationship with Agriprocessors and Sholom Rubashkin.