"I should stand in front of you in line, you parasite – you steal my paycheck!" 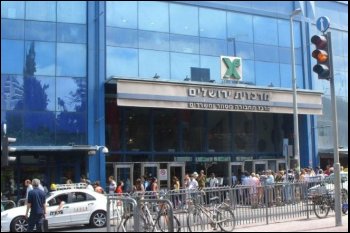 Behadrei Haredim reports that haredi-secular strife has “gone out from the Knesset plenum and impacted the streets.”

The haredi news website reports that a yeshiva student was in line Tuesday night at the security check at the entrance to the Jerusalem’s Central Bus Station when he was accosted by secular man.

"I should stand in front of you in line, you parasite – you steal my paycheck!" the secular man allegedly said according to a report front the Dosim website (the haredi public relations project on the Internet) cited by Behadrei Haredim.

The secular man then cut in line in front of the haredi yeshiva student.

Witnesses say the yeshiva student did not know how to react and was very embarrassed.

"Worst of all, none of those standing next to the yeshiva student protested against the secular man’s behavior. Everyone went about their business,” one of the witnesses reportedly said.

Along with the current debates over funding of haredi schools and haredi military service, months of widely-publicized anti-secular slurs and anti-secular statements from haredi politicians and rabbis, along with actions meant to inflame and insult Israel’s non-haredi population, including a haredi barbecue held on Holocaust Remembrance Day near Israel’s national Holocaust memorial, have certainly contributed to the country’s anti-haredi climate, as have a series of revelations about alleged haredi misuse of state funds that took place during the previous administration – although Behadrei Haredim does not report any of these provocations in this story.

Posted at 06:20 AM in Bigotry & Racism, Haredim, Israel | Permalink

"I should stand in front of you in line, you parasite – you steal my paycheck!"