« Moses Stern Bribed Spring Valley's Deputy Mayor At Least Once Before Bribing Him In Sting Now Being Prosecuted By The Feds | Main | Haredi Leader Condemns Zionist Orthodox Jews, Politician As “Infidels” and “Amalek” » 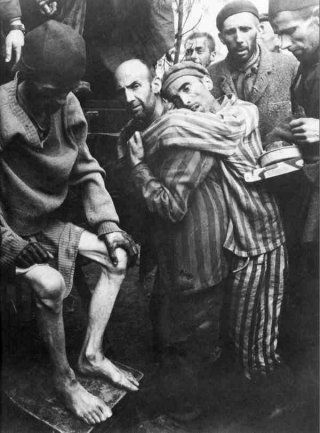 Prisoners at the liberation of Auschwitz

“[The barbecue] is in the memory of the Holocaust's victims," one of the haredim defiantly sneered.

The haredi yeshiva students and their wives were seen gathering around smoking grills.

Many of the Holocaust’s 6 million victims were gassed in death camps and then burned in crematoria.

"We don't do what you tell us. We remember the Holocaust more than you and any other secular person. We just honor their memory in our own way," one of those haredi yeshiva students, identified as Yossi from Beit Shemesh.

"What do you want from us? You drive around on Shabbat [the Jewish Sabbath], you don't fast on the Fast of Gedaliah. Do you even know what that is?" another haredi yeshiva student said.

"My grandmother is a Holocaust survivor. It’s you, the secular people, who don't respect the victims. We will read Psalms for them tomorrow morning and study Torah in their memory. What do you do? Say a few pretty words and sound a siren? Besides, today’s a day off, and we came here to relax,” a third haredi yeshiva student reportedly said.

"To barbecue while Jews are mourning the pain of the six million? What permission is there for this? This is blasphemy! Are we in a place that's cut off from the world?" Ashkenazi Chief Rabbi Yona Metzger, himself now a haredi but who was raised in a Zionist Orthodox home, said in disgust.

Haredim get no Holocaust education in their yeshivas and most know nothing about the systematic mass murder of 6 million Jews – even when their own relatives are among the dead.

What haredim do know about the Holocaust largely comes from two sources: Satmar anti-Zionist propaganda that inaccurately portrays Zionists as working together with Nazis to murder “Torah-true” Jews and hagiographic haredi material that emphasizes the positive roles played by haredi rabbis.

If haredi schools taught Israel’s core curriculum as required by law, they would have a much broader and much more accurate knowledge of the Holocaust. But haredi schools do not teach those core subjects because Prime Minister Benjamin Netanyahu as spent years appeasing his haredi allies by, in part, making sure they don’t have to. Netanyahu has done this the way he has done many other things for his haredi allies – by not enforcing the laws he is sworn to uphold.