"Our duty is to make sure no child goes hungry. But I want to remind you of one thing: The entity that is responsible for providing for children is called 'their parents.' When you bring a child to this world, MK Porush, you're the primary person responsible for him.” 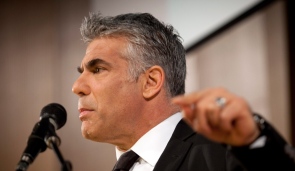 A few hours before the session began, Lapid gave Prime Minister Benjamin Netanyahu his version of the country's new budget. It includes a $5 billion cut in government spending, most of it coming from defense, stipends given to families that have many children – the vast majority of whom are haredi and Arab – state employees' salaries, and through freezing infrastructure projects. Lapid’s plan also includes a 1% raise of the Value Added Tax (VAT) and another 1% raise in income tax for incomes above $2,449 per month.

In a meeting with his Yesh Atid Party early today, Lapid discussed his proposed budget cuts.

"Our heart goes out to anyone who can't make ends meet, but empathy can't replace policy. In two years every Israeli will feel the change, feel that he lives in a fair state which treats his money with respect,” Lapid said.

When Lapid spoke at the Knesset session later in the day, haredi lawmakers – sitting in opposition for the first time in years and representing communities who are slated to bear the brunt of Lapid’s proposed budget cuts – interrupted Lapid and attacked him over the budget cuts.

"I understand you're going through tough times. Weren't you sitting in the government which created the deficit? Were you on Mars? You were in every government [for years], and you were costly partners,” Lapid shot back.

"I heard he's going to hit Israel with unbearable economic measures. This is a government which is built on hate alone. The highest of this government's achievements is exclusion of the haredim.…Ask Yair Lapid what's the height of his achievements, and for him it's a good post on Facebook,” Porush said. He also attacked the country’s overall drop in military enlistment rates, claiming that it was the most important issue facing Israel. But Porush’s solution to that problem is to crack down on non-haredi draft evasion while allowing all haredim to evade military service.

When Lapid spoke, he rushed to attack Porush.

"You were impudent enough to come here and say the main issue in Israel is the security issue and that you're worried over the drop in the enlistment rate. You are worried? I want to tell you, sir – don't worry yourself. This government will take care that. There'll be plenty of new recruits right out of your backyard,” Lapid said, referring to the looming draft of tens of thousands of haredi yeshiva students who until have been able to evade the draft.

As he spoke, Lapid was constantly heckled by what Ynet called “apoplectic” haredi MKs. Lapid reportedly responded in kind, giving as good – or better – than he got.

When UTJ MK Moshe Gafni heckled him, Lapid responded, "We're tired of taking your orders. Israel doesn't belong to you."

Lapid reminded haredi MKs of their responsibilities as parents.

"Our duty is to make sure no child goes hungry. But I want to remind you of one thing: The entity that is responsible for providing for children is called 'their parents.' When you bring a child to this world, MK Porush, you're the primary person responsible for him,” Lapid said.

UTJ MK Yisrael Eichler shouted, "We will not let you take money from the children!”

Lapid didn’t miss a beat, attacking Eichler for his earlier call for a haredi tax rebellion to punish the government for drafting haredi yeshiva students.

"MK Eichler, I heard you called for a tax rebellion. What will you threaten next, that haredim will not enlist? What are you talking about?" Lapid said, referring to the fact that so few haredim work or pay taxes anyway.

Lapid shot back, "I post on Shabbat because I don't keep Shabbat. I'm not telling you what to do on Shabbat and you won't tell me."

Zahava Gal-On of the left wing Meretz Party then condemned lack of progress in the peace process.

"The Israeli-Palestinian conflict has been going on for 150 years. I'm sorry we didn't solve it on our first week in office,” Lapid derisively replied.

Following the debate, the Knesset rejected six separate no-confidence motions. Each motion had 43 MKs voting in favor and 63 MKs against.

"Lapid returned with Benjamin Netanyahu's plan, including a NIS 5 billion[$1.3 billion] tax increase. It's going to be an impossible burden to carry, certainly for miserable Riki from Hadera, and definitely for the poor,” she said.

"Our duty is to make sure no child goes hungry. But I want to remind you of one thing: The entity that is responsible for providing for children is called 'their parents.' When you bring a child to this world, MK Porush, you're the primary person responsible for him.”