Many (if not all) haredi schools that take money from the state remained open on Israel's Independence Day despite a government directive ordering them to close in compliance with the law. This has led to calls to sanction and/or defund these schools. 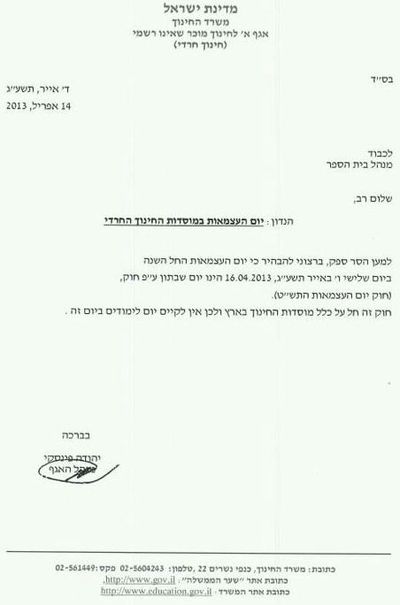 In order to remove any doubt, the Ministry of Education’s unit responsible for chareidi mosdos [schools, yeshivas, heders, seminaries, etc.] that receive state funding sent a directive [posted above] ahead of Independence Day, instructing schools to close as it is a nationally recognized holiday.

Maariv decided to follow up and it reports that in Kiryat Sefer, Elad and Betar Illit, most boys schools were operating on Independence Day in violation of the ministry directive. Many talmidei torah in Yerushalayim, Bnei Brak and Beit Shemesh operated as well. The report refers to chareidi mosdos that are not part of the ministry’s public school system, but are recognized as such receive different level of state funding, compelling adherence to ministry directives.

According to Maariv, some of the parents of students attending these chareidi schools were angered because they were compelled to send their children, who were deprived of the day off. One parent is quoted as saying “despite the fact they do not hold the day in regard, the mosdos should not be surprised if they must pay a price for intentionally ignoring ministry directives.”

Some mosdos report regular sessions were not held, but informal and/or voluntary classes. Maariv quotes the same parent as explaining “this is not so,” citing that students that davka absent themselves on Independence Day find themselves in a difficult situation with school officials.

The Ne’emanei Torah V’Avodah organization’s attorney has turned to Education Minister Rabbi Shai Piron to conduct an official probe to determine which chareidi schools were operating on Independence Day and to take sanctions against those schools “for if sanctions do not follow, what is to prevent the continued flippant attitude towards the laws of the state” the organization questions.

The organization’s statement continues “We bless the daily study of Torah, even on Independence Day, but not in state schools for there is the fear if each conducts himself according to his own will, what will become of the law. Tomorrow, we will find schools operating on Shabbos and/or Yom Kippur.”

The Hiddush organization joins in calling for stiff sanctions for violating the Independence Day directive.

Ministry officials report the appropriate officials are probing the matter.

Posted at 07:05 AM in Haredim, Israel, Religion, Religion & State | Permalink

Many (if not all) haredi schools that take money from the state remained open on Israel's Independence Day despite a government directive ordering them to close in compliance with the law. This has led to calls to sanction and/or defund these schools.