“It would be an act of pride and against the collegial structure that presides over decisions. I assume my functions fully," Grand Rabbi Gilles Bernheim told Radio Shalom in Paris tonight. 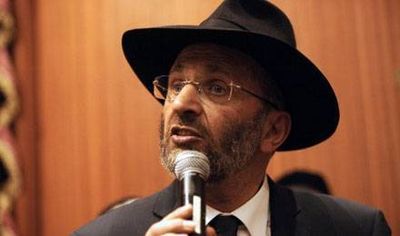 …“It would be an act of pride and against the collegial structure that presides over decisions. I assume my functions fully," [Grand Rabbi Gilles] Bernheim, 60, a modern Orthodox Jew who was elected chief rabbi in 2008, told Radio Shalom.

"I ask for forgiveness from all those close to me, my family and the community as a whole that I have disappointed," he said.…

Bernheim's troubles began last month when a blogger accused him of copying a 1996 text by the late French post-modernist philosopher Jean-Francois Lyotard to use in his 2011 book "Forty Jewish Meditations."

Bernheim responded by saying he was a victim of Lyotard's plagiarism of notes from lectures he had delivered in the 1980s when he was Jewish student chaplain in Paris.

Two weeks later, he admitted Lyotard had authored the disputed passage and blamed a student researcher he hired to help write the book because he was too busy with other duties.

His philosophical and historical defense of traditional marriage had attracted the attention of former Pope Benedict, who unexpectedly praised it in his annual speech to the Vatican Curia last December, calling it "profoundly moving."

But even that has been called into question.

Jean-Noel Darde, a French academic who fights against plagiarism and has been one of the sources of the accusations, said on Tuesday that Bernheim had also plagiarized in that leaflet, prompting France's largest Jewish association to demand an explanation of the rabbi's behavior.

Last week, another blogger accused Bernheim of plagiarism in a 2002 book and L'Express magazine revealed he had not earned the prestigious rank of philosophy professor that was often attached to his name.

Although his official biography did not mention him passing the "agregation". the highly selective examination needed to qualify as a professor, Bernheim never disputed the title when it appeared in newspaper articles and publicity for his books.…

“It would be an act of pride and against the collegial structure that presides over decisions. I assume my functions fully," Grand Rabbi Gilles Bernheim told Radio Shalom in Paris tonight.