The Rabbinical Centre of Europe – which was founded by and is controlled by Chabad – issued a statement today claiming the circumcision was done properly and that it conformed with German law that requires medical protocols be followed. But as the photo to your right shows, Chabad was lying. 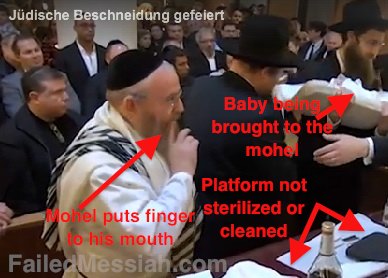 The Chabad-controlled Rabbinical Centre of Europe issued a statement today on the controversy that erupted in Germany after the Chabad emissary in Berlin Rabbi Yehuda Teichtal had his baby circumcised with metzitzah b'peh (MBP), the direct mouth-to-bleeding-penis sucking done by most hasidic mohels after removing the foreskin. MBP has been lined to hundreds of cases of STD transmission and the transmission of other diseases, causing epidemics of syphilis and other diseases in the 19th century and deaths, maiming and severe illness from Herpes Simplex Virus-1 in the 21st.

Germany almost banned all child ritual circumcision of minors last year, but instead passed a law allowing it – as long as it was sanitary and followed modern medical protocol.

Techtal's circumcision, however, broke that law.

MBP was done, the area the circumcision was done in was not sterile, and the mohel did not wear gloves or sterilize his hands. In fact, on a video of the circumcision, the mohel can be seen touching his finger to his own mouth a moment before the operation began.

The video shocked Germany and caused an anti-child-abuse activist to file suit to ban child circumcision.

Teichtal's supporters in Chabad came up with a typical Chabad defense – lie.

The Rabbinical Centre of Europe – which was founded by and is controlled by Chabad – issued a statement today claiming the circumcision was done properly and that it conformed with German law that requires medical protocols be followed. It also carefully parsed its statement to direct blame to the Israeli mohel and away from Teichtal. The mohel lives in Israel and will never be extradited for this; Teichtal lives in Germany.

The RCE also rushed to announce The much older non-Chabad European rabbinic organization, the Conference of European Rabbis (CER), announced last week that it would give German Chancellor Agela Merkel an award for standing up for ritual circumcision last year.

The CER also criticized Teichtal for having MBP done, and insisted mohels should use sterile glass tubes rather than direct oral contact to perform metzitzah. But iwith that t also issued a defense of properly done non-MBP circumcision.

Will this be enough to save circumcision in Germany?

In past few days, Rabbi Yehuda Teichtel, Community Rabbi of the Jewish Community of Berlin has been criticized regarding the circumcision of his son; he was accused of being responsible for bodily harm to his son.

We the Rabbinical Centre of Europe (RCE) hereby express our full support for Rabbi Teichtel and stand fully behind him.

We are aware that he spoke to a Mohel, (who has 30 years of experience and is one of the internationally most renowned mohalim with a certificate from the Israeli health ministry and the Chief Rabbinate of Israel), prior to the ceremony and asked him to perform the circumcision according to proper medical manner and in accordance with the Jewish law and German laws.

The Mohel assured him that he indeed performed the circumcision in such a manner.

In the past days, he has been attacked with negative comments in the media. This is truly saddening as those who attacked him did not even make the effort to speak to the Berlin Rabbi first and to find out the facts.

The Jews of Europe must have religious freedom. All Jewish leaders have the responsibility and obligation to stop any interference with any detail of Jewish practice.

Rabbi Teichtel has lived and worked in Berlin for almost 17 years, he is known to stand for fairness and respect and for an open, tolerant cooperation within our society.

The Rabbinical Centre of Europe – which was founded by and is controlled by Chabad – issued a statement today claiming the circumcision was done properly and that it conformed with German law that requires medical protocols be followed. But as the photo to your right shows, Chabad was lying.