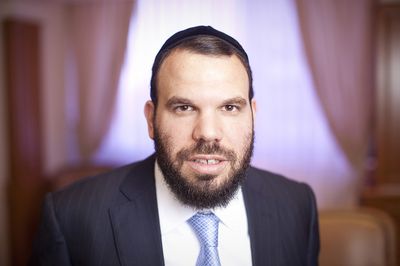 An Israeli haredi, Dan Gertler, has made the Forbes 29 Billionaires Under 40 [Years Old] list.

Gertler has $2.2 billion – most of it from allegedly raping the Democratic Republic of Congo.

Forbes calls him "an emerging face of irresponsible capitalism in Africa."

What is Gertler known for? This:

…Gertler, whose grandfather co-founded Israel’s diamond exchange in 1947, arrived in Congo in 1997 seeking rough diamonds. The 23-year-old trader struck a deep friendship with Joseph Kabila, who then headed the Congolese army and today is the nation’s president. Since those early days, Gertler has invested in iron ore, gold, cobalt and copper as well as agriculture, oil and banking. In the process, he’s built up a net worth of at least $2.5 billion, according to the Bloomberg Billionaires Index.

He’s also acquired a roster of critics. Many of the government’s deals with Gertler deprive Congo’s 68 million people of badly needed funds, according to the London-based anticorruption group Global Witness and lawmakers from Congo and the U.K., the country’s second-biggest aid donor after the U.S.

“He has political connections, so state companies sell him mines for low prices and he sells them on for huge profits. That’s how he’s become a billionaire.”

In the eight months preceding November 2011 elections, in which Kabila won a second five-year term, companies affiliated with Gertler bought shares in five mining ventures from three state-owned firms, according to minutes of board meetings, company filings and documents published later. The state companies didn’t announce the sales.

Gertler denies that he purchased companies at below-market rates or that any of his deals have involved kickbacks.

“The lies are screaming to the heavens,” he says…

Congo has a history of making deals out of the public view. The International Monetary Fund this month halted a $532 million loan program with the country. The IMF said the government didn’t adhere to its demand to publish the full details of a 2011 mining deal between a state-owned miner and a company that two people familiar with the matter say is affiliated with Gertler.

Congo will lose out on three loan disbursements worth a total of about $225 million, according to Oscar Melhado, the IMF’s resident representative in Congo.…

But you need not worry. Gertler is a very religious man:

[Gertler] returns from Congo to his home in Bnei Brak, an ultra- Orthodox suburb of Tel Aviv, each week to spend the Sabbath with his wife, Anat, and their nine children.…

Gertler broke with his family’s secular tradition when he and Anat decided to adopt an ultra-Orthodox lifestyle. They’ve banned television and computers from their five-story, terraced house in Bnei Brak, whose crisp stone finishing and verdant shrubbery lining each floor contrast with the neighbors’ concrete apartment buildings.

Today, Gertler donates to Jewish charities in Israel, including Migdal Ohr, which runs boarding schools for indigent children and orphans. He also helped finance a Jewish bone- marrow registry at the Ezer Mizion medical charity in Tel Aviv, which says it’s the largest in the world of its kind.

In Congo, he supports the Chabad-Lubavitch center, which provides religious and educational services to Jews throughout Africa. Gertler’s family foundation also contributes to charities operating in Congo, including health centers and Operation Smile, which performs surgery on children born with cleft palates. He has also put $12 million into building an agricultural academy on the outskirts of Kinshasa, the capital, that co-founder Gil Arbel likens to a “Congolese kibbutz.”…