« Haredim: The Ultimate Disrespect | Main | Hit And Run Driver Who Killed Hasidic Couple And Their Baby Had Killed Before »

"The moment the rabbis say it's forbidden, it will all end, even if it means the boys and their families starve." 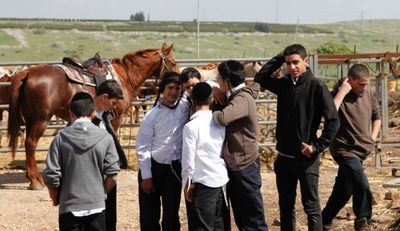 Ha'aretz has a translation of an article in its sister business publication The Marker about a series of ORT-sponsored haredi yeshivas for teens.

ORT is secular and Zionist. Yet it sponsors the yeshivas for haredi shabbabnikim, "street bums," who left or who were ejected from their yeshivas due to poor academic performance or behavioral issues.

In the haredi world there are only two choices: studying in yeshiva or being tossed out them and onto the streets.

Most of these haredi ORT students have learning disabilities and serious family problems.

ORT teaches the students a trade. They also teach math, civics and other secular subjects, and traditional yeshiva studies.

Haredi rabbis – who to a man officially oppose combining yeshiva study with learning a trade or studying English and other secular subjects – have basically looked the other way and allowed the ORT yeshivas to function, as long as ORT has kept the profile of these yeshiva exceeding low.

The ORT yeshivas are boarding schools located in rural areas of the country. The ORT yeshiva the Marker visited has a sign, but you can't see it until you pass through the yeshiva's security gate and enter the grounds. But for the first three years of the yeshiva's existence, it had no sign at all.

"They can be electricians or carpenters and make a living by serving the population in Bnei Brak [the ultra-Orthodox neighborhood near Tel Aviv]. At the end of their studies, they are meant to return to their communities and [continue] yeshiva studies. The intention is to enable them to make a living from a trade suitable to the needs of the Haredi public and also allow them…to combine work with yeshiva studies.…We don't encourage them to go into the regular army…since it isn't natural for Haredi youth. Our goal isn't army service but integration into the life cycle and giving these young men the chance to support a family. We won't initiate anything that could distance them from the Haredi lifestyle,” Zvi Peleg, ORT’s director-general, told The Marker.

Even so, most of the first set of ORT yeshiva graduates joined the army's Nahal Haredi program. Two former ORT yeshiva students also went on to become paratroopers. ORT tries not to publicize this, however.

“[ORT yeshivas are] a way to generate change in Haredi society – quietly and from the bottom. Our three yeshivas could put out 600 graduates a year, all of them agents of change. They will return to their communities, to the sudden discovery that they're not such bad marriage prospects after all – since they keep a haredi lifestyle and can also support themselves. This is the way to transmit the message that learning a trade is something good. It's a foot in the door," Peleg said.

The ORT yeshiva The Marker visited has 95 students who otherwise would be roaming the streets. Almost all are haredi.

And, Peleg was quick to point out, none have abandoned religion or the haredi lifestyle. The expectation is that these kids will return to their haredi communities; get jobs as carpenters, mechanics, plumbers or computer technicians; continue to study part time in a yeshiva; and marry.

Even so, the existence of the ORT yeshivas is precarious.

"The moment the rabbis say it's forbidden, it will all end, even if it means the boys and their families starve," Peleg said.

Posted at 08:14 AM in Haredim, Israel, Religion, Religion & State | Permalink

"The moment the rabbis say it's forbidden, it will all end, even if it means the boys and their families starve."