One of the few restaurants in Jerusalem that was open on Shabbat has reportedly been forced to close. Restobar in the once largely secular upper class Rehavia neighborhood lost its lease Monday after its landlord, Laurent Levy, refused to renew the lease unless Restobar closed on the Jewish Sabbath. 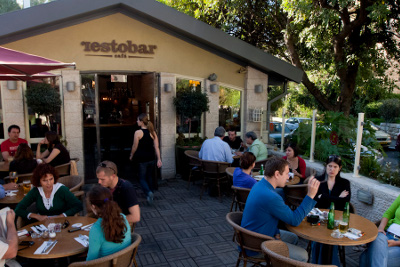 One of the few restaurants in Jerusalem that was open on Shabbat has reportedly been forced to close.

Restobar in the once largely secular upper class Rehavia neighborhood lost its lease Monday after its landlord, Laurent Levy, refused to renew the lease unless Restobar closed on the Jewish Sabbath, Ha’aretz reported.

Shahar and Avigail Levy, who are not related to Laurent Levy, owned the much-loved 8-year-old restaurant and bar, complained about Laurent Levy’s religious coercion on their restaurant’s Facebook page.

“It’s sad that in Jerusalem in 2013 there are benighted people who impose on others to accept a way of life that isn’t theirs by force ... and in one fell swoop erased the livelihood of some 50 employees and dozens of suppliers who were sustained by this business for many years,” the Levys reportedly wrote.

During the first two years of Restobar’s existence it was closed on Shabbat. But from that point onward it was open seven days a week.

Laurent Levy apparently acquired the building Restobar occupied after the restaurant had made the switch from kosher to open on Shabbat.

Laurent Levy, who is Orthodox, urged the Levys to return Restobar to being a kosher Shabbat-observant establishment. They refused, and at first Laurent Levy begrudgingly went along with the Restobar owners’ wishes.

But the most recent lease renegotiation was different.

“Now, when it came time to renew our three-year lease, he said, ‘I won’t raise your rent but you have to become kosher [which requires being closed on Shabbat].’ We tried everything; we even contacted Mayor Nir Barkat to ask him to intervene. We told him this was a secular institution and it would be a shame to see it close. But Nir said, ‘I can’t get involved in private issues,’” Shahar Levy told Ha’aretz, noting that Laurent Levy “said in this messianic fashion, ‘blessing will come to you from the minute you close on Shabbat; it will do you good.’ Until the last minute we thought it would work out, but in the end, to our regret, we had to give up the site,” Shahar Levy said.

He and his wife reportedly have no immediate plans to reopen Restobar elsewhere.

A demonstration took place Monday evening in front of the eatery to protest what organizers said was religious coercion.

The Hitorerut Yerushalayim [Wake Up Jerusalem] movement, which tries to defend religious pluralism and freedom of and from religion, organized the protest calling on the city to ensure that entertainment and cultural venues continue to remain open on Shabbat.

“[Restobar’s closure] bodes ill for those who want Jerusalem to allow the entire public to live life as they choose. The days when Jerusalem’s civil society accepts such things [as the closure of Restobar due to religious coercion] with equanimity are over. We’ll make sure that for every such closure, five new places will open,” Hitorerut Yerushalayim reportedly said in a statement.

Laurent Levy is best known in Israel for making eyeglasses available to the needy at minimal cost.

Almost a dozen restaurants located in or near Jerusalem’s Mahane Yehuda market threw out rabbis from the Chief Rabbinate and have tried to remain open without the Chief Rabbinate’s kosher supervision, citing thuggish behavior by the rabbis and rabbinically-mandated fresh vegetable suppliers who sold often inferior quality vegetables at a much high cost than other suppliers.

The rabbis claimed this was necessary due to possible insect infection in the non-supervised produce.

The restaurant owners responded by noting that they follow strict guidelines for cleaning and inspecting produce, and noted that the rabbis’ true interest seemed to have much more in common with extortion than it does with keeping kosher. One owner pointed out that she has been cleaning and inspecting vegetables since she was a small child, just as her mother and grandmother had done before her, and the rabbinate’s guidelines are no stricter than her own.

Several months after the dispute became public, Israel’s Sefardi Chief Rabbi Shlomo Amar issued a ruling prohibiting the consumption of much of the rabbincally supervised produce because of danger to human life. Amar noted that the supposed bug-free produce was produced with massive amounts of pesticides and other chemicals, in many cases in amounts far in excess of the legal limit.

Posted at 08:20 AM in Israel, Religion, Religion & State | Permalink

One of the few restaurants in Jerusalem that was open on Shabbat has reportedly been forced to close. Restobar in the once largely secular upper class Rehavia neighborhood lost its lease Monday after its landlord, Laurent Levy, refused to renew the lease unless Restobar closed on the Jewish Sabbath.