Entering The Breslov World Of "Nobility"

"…He locked me in his room …[and] pointed to the bed.…He kissed me and stuck his tongue in my mouth. He held me real tight, my whole body, close to his, and he became dreadfully excited and panted. He told me, 'Now you are in the world of nobility,' and licked my face until it was really sticky.…After that he put his hands under my blouse and felt me up brusquely.…I ran to my husband and told him excitedly that the rabbi said I was in the world of nobility. We began to fight, because my husband understood." 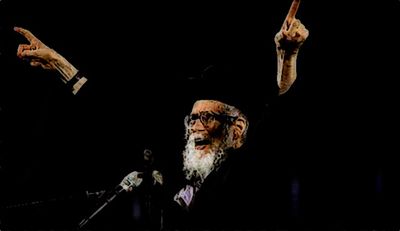 Tamar Rotem is, day-in-and-day-out hands down the best reporter covering haredi Judaism in Israel today. Rotem, who comes from a haredi family but who left the haredi community years ago, scores a huge bullseye with her report in Ha'aretz about the alleged sexual abuse of women by the leader of Breslov's Shuva Banim sect, Rabbi Eliezer Berland, Here is an excerpt from her report:

It took A. some time to realize she had been sexually harassed by Rabbi Eliezer Berland - a holy and righteous man in her eyes - and for her to file a police complaint. She is 18, married, her pretty face wrapped tightly in a black kerchief in the so-called Jerusalem fashion. She is going through a crisis, not only as a woman who was sexually harassed, but also as someone who was raised with a unique system of beliefs, at the center of which is the rabbi, the righteous foundation of the world.

Since A. became disillusioned, her world has collapsed. She stopped working, and her life now revolves around both the court case and the rift in her community, which has shunned her since she submitted her complaint to the police.

"I am the daughter of a veteran disciple of the rabbi," she says. "My father still believes in him. I think that if he were to cease believing, he would die from it. Today, now that I am outside, I understand that Shuvu Banim is a false Hasidic sect that is only after money. Everything the rabbi would do was very peculiar, not ordinary. He would yell, would travel around at night to tikkunim [sessions of 'spiritual repair'], and we'd follow after him.

"My husband is a righteous one. Our vart [a Yiddish term for an occasion that proceeds a betrothal] was at the rabbi's. We waited there all night. My husband cried to the guards to let us in to see the rabbi, and only at 5 A.M. did we break a plate. I was pleased. It was a matter of pride between me and my girlfriends that I had a groom who would chase after the rabbi. After the sheva berakhot [the week of nightly meals and blessings after a wedding], my husband continued his pursuit of the rabbi. He would go to Hebron, Amuka [in the Galilee] - wherever the rabbi was, my husband would chase after him. Later I joined in too.

"We thought we were demonstrating our devotion. For a year after our marriage, I did not have a single evening with my husband, because I was busy, in pursuit: We were the rabbi's minions. There was a group of women who pursued the rabbi. The rabbi would excite us, suddenly emerge from the car, do tikkun, and then get in and drive off. I worked from noon until 4 P.M., so that I would have time to sleep in a little in the morning, but many times I would telephone and say that I wasn't feeling well. So I also wasn't receiving a proper salary.

"My father instilled in us at that the rabbi is the essence of spirituality at home. I began going to the rabbi too, because we'd heard you could get a blessing. Once we used to see him from afar, but now we realized that you could get in to see him without paying millions of shekels. We got excited, we started going to him at night.

"The first time I went in to the rabbi, it was with another woman: He gave us a kiss on the forehead. Something gentle, a kiss from the righteous one. At the time I didn't think it was unusual, but from a kiss it developed into holding you, touching, licking. A lot of women don't believe the rabbi touched and kissed [others], because he didn't touch them. These are older Ashkenazi women.

"If he had touched them, they would have done him in. So he did it to us, the innocent disciples. Like that, so we wouldn't feel it, his hands were constantly fluttering about. He would come close and do it quickly without your realizing, with three or four women in the room - caress this one, embrace that one. One day he told my husband, 'Your wife will have the privilege of being in the world of nobility' [a higher realm the soul belongs to, according to kabbala]. It was only afterward that we understood he was preparing him.

"That time I had come with my husband to the rabbi as usual, and he said, 'You stay here and you come with me.' He locked me in his room and went out. When he entered he pointed to the bed. I don't remember what he said to me. He kissed me and stuck his tongue in my mouth. He held me real tight, my whole body, close to his, and he became dreadfully excited and panted. He told me, 'Now you are in the world of nobility,' and licked my face until it was really sticky. I was fighting with myself not to do anything. To this day I am traumatized by it.

"After that he put his hands under my blouse and felt me up brusquely. And then he opened the door and I ran to my husband and told him excitedly that the rabbi said I was in the world of nobility. We began to fight, because my husband understood."

'I miss kissing you'

A. says Berland frequently preached sexual abstinence. "For nine months he told me and my husband not to touch. From the time we married, we were prushim [abstaining from sexual relations]. It killed us. Sometimes we would touch and then we'd say, 'The rabbi will be mad at us.' My husband and I would go in and I would ask the rabbi, 'When will we be blessed with children?' He would say, 'You are not touching each other? You will be visited.' We were naive. I thought I would have children just because the rabbi promised me we would be visited. But he kept on saying, 'Now go immerse yourself' [in a ritual bath], as though he was ensuring that I would be pure for him. In front of other people he would ask: 'When did you go to immerse yourself?' I whispered in his ear, and he would say in front of the others that I had gone. I would feel embarrassed. The rabbi would call all the time: I love you, miss you, miss kissing you. But he would mix this sort of talk with holy talk. And then all of a sudden he stopped calling me."

A. came to her senses with the help of a veteran disciple of the Bratslav Hasidic sect. "The Hasid's daughter was a friend of mine," she explains. "She would go in to the rabbi every night, like me. After the incident occurred [the sexual harassment], her father told her he a secret scroll, which told of 18 women who were each tied to the righteous one [the rabbi] on a different side of the body and how each has a part in redemption. We came to her father and began talking to him about it. Suddenly he said, 'Enough, there is no secret scroll. The rabbi is despicable.' We were shocked. He called our husbands and told them. Only then did we understand what had happened, and everything blew up."…

There are women from Breslov who are helping the alleged victims, Rotem reports, noting that those alleged victims are many in number. Most still fear coming forward because of the "thugs" in Shuva Banim who remain loyal to Berland.

As it now stands, there is a split in Shuva Banim between those who believe the women and the former disciple of Berland, Itai Nachman Shalom, who climbed up to peer into a window, where he says he saw Berland having sex with one of the women. Shalom was attacked by thugs loyal to berland and responded by shooting up the door of the apartment of one of them.

Berland was only doing what was necessary to protect Israel from harm, he and his disciples allegedly claim. Having sex with Berland was spiritually protecting Israel from an Iranian Holocaust.

Entering The Breslov World Of "Nobility"

"…He locked me in his room …[and] pointed to the bed.…He kissed me and stuck his tongue in my mouth. He held me real tight, my whole body, close to his, and he became dreadfully excited and panted. He told me, 'Now you are in the world of nobility,' and licked my face until it was really sticky.…After that he put his hands under my blouse and felt me up brusquely.…I ran to my husband and told him excitedly that the rabbi said I was in the world of nobility. We began to fight, because my husband understood."