“We’re not going into it naïve. These are the precautions that we’re putting into place to allow him to stay in business from now until April 1. What happens after that, we’ll have to see.” 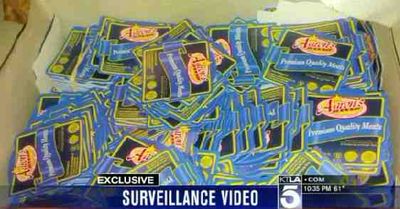 As you probably remember, Doheny Glatt, a kosher butcher in Los Angeles, was caught last week bringing non-glatt (and perhaps non-kosher) into its shop in large quantities while the Rabbinical Council of California's (RCC) mashgiach wasn't there looking. Doheny Glatt was caught by a private investigator working on his own time, who spent months tracking Doheny Glatt's transgressions and catching many of them on video. He also recovered thousands of what are called fraudulent Aaron's Best labels for the meat.

The PI, who is Israeli by birth, gave the video to the RCC. But he also gave it to an LA TV station to broadcast. The rabbis had time to view the tape first and to take action if they so chose, but they had to make that decision knowing that the jewish community – and everyone else – would know about the scandal a few hours later.

The RCC revoked its supervision of Doheny Glatt. The revocation went into effect at 3 pm on the eve of Passover. The RCC told LA Jews that all meat purchased before that time was kosher and could be eaten for the holiday, apparently basing its ruling on the halakhic concept of rov, majority. The majority of the meat was definitely kosher (even if not glatt), and it could well be that the glatt meat itself was the majority. Either way, rov would apply and all the meat already in people's possession would be kosher for consumption.

That ruled, the issue for continuing to grant kosher supervision to a butcher/distributor who cheats by bringing unauthorized meat into his store on the sly is pretty clear. He can't be trusted. And the supervision should be removed – which is what RCC did.

The Weisses rushed in to give what they call temporary kosher supervision to Doheny Glatt, as the Jewish Journal reported yesterday:

…Despite the situation, Doheny Market was open for business on Thursday and its front window displayed a new kosher certificate  -- valid only until April 1.

The name and signature of Rabbi Meshulom Dov Weiss appear on the certificate, and the rabbi’s son, Rabbi Menachem Weiss, told the Journal that he and his father are working with Engelman to ensure that everything sold by Doheny is certified kosher. Weiss said that any opened meat packages had been removed from the store, and that two mashgiachs will now be on site at all times, and seven video cameras were to be installed throughout the premises, allowing the father to monitor the store via the web from his home in North Hollywood.

“We’re not going into it naïve,” Menachem Weiss told the Journal on Thursday. “These are the precautions that we’re putting into place to allow him to stay in business from now until April 1. What happens after that, we’ll have to see.”

The Weisses have acted as supervisors for Doheny before, for about 18 months starting in 2007 or 2008. Menachem Weiss did not remember the exact years, but said that Engelman brought them in after the RCC informed him – along with the rest of the shops they certified – that from then on, all meat sold under RCC kosher supervision had to be not just kosher, but glatt kosher.…

When the RCC began to insist upon the higher standard, it brought with it higher prices. Engelman, Weiss said, initially decided to drop the RCC’s certification and to continue selling kosher meat that did not meet the glatt standard under the Weisses’ supervision.

However without the RCC certification, Weiss said, Doheny’s business suffered, and Engelman decided to adhere to the glatt standard and return to the RCC.

“Our intent is not to replace the RCC,” Menachem Weiss said. “Our hope is that the RCC will take Mike back; we’re trying to help Mike earn back the trust of the community.”…

What the Jewish Journal does not report is that Meshulam Weiss used to work in Postville for Sholom Rubashkin. One of his sons, Rabbi Yaakov Weiss (who has had his own legal troubles over the past few years and who is no longer an official Chabad shaliach as a result) is married to Sholom Rubashkin's daughter Roza. Menachem Weiss (who is also no longer a Chabad shaliach) is therefore Roza Rubashkin's brother-in-law.

A lot could be said about what these odd coincidences might mean, but at this point, whatever I would say would be closer to speculation than to news reporting, so I'll leave it up to you to speculate for yourselves. But you can see the possibilities here could be quite significant.

[Hat Tip for the video posted above: DH.]

“We’re not going into it naïve. These are the precautions that we’re putting into place to allow him to stay in business from now until April 1. What happens after that, we’ll have to see.”