After the scandal-plagued haredi-controlled East Ramapo school board again abruptly ended a public meeting early, this time cutting off what was supposed to be time for students to question the board, the board's high-priced attorney shouted and cursed at a local activist. When an honors student passing by tried to intervene, the attorney shouted and cursed at him, as well. 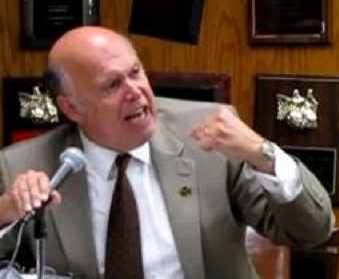 …Nicholas Pulakos, a Ramapo High School senior, said he was leaving the building with a friend when he encountered activist Steve White standing outside as board members and attorney Albert D’Agostino chatted nearby.

Pulakos, 17, said he and White struck up a conversation, and White relayed to him that D’Agostino moments earlier had made nasty comments and cursed at White, who has criticized D’Agostino in the past. As they were talking, D’Agostino approached and made a disparaging remark using profanity to White, prompting the teen to jump in.

“That sounds a lot like a threat,” Pulakos said he told the lawyer.

From there, the exchange escalated into a shouting match between the teen and D’Agostino as the man walked toward the parking lot, shouting profanities at Pulakos, White and a nearby parent who overheard and tried to intervene, Pulakos said.

On Wednesday, Pulakos told The Journal News that with a day’s hindsight, he thought that though speaking up may not have been the right decision, he couldn’t bite his tongue when he witnessed an adult threatening another adult.

“I don’t understand why (D’Agostino) was talking like that in front of students,” he said. “I just felt like something needed to be said so I said something.”

Pulakos, an athlete who is active in school clubs and the honor society, said he reported what happened to a teacher and the principal Wednesday.…

The announcement by board president Daniel Schwartz that the public meeting would be abruptly ended took place at about 8:30 p.m., after students and parents who wanted to address the board had already waited two hours for the chance to do so.

I believe the board's conduct under Schwartz's leadership violates the civil rights of the students who, as you can see in the video posted below, are heavily Black and Latino.

I also believe that when taken together, the civil rights violations along with the financial irregularities, the board's penchant for selling vacant school buildings to haredi yeshivas at prices that appear to be well below fair market value, and the board's doing so without putting the properties up for sale in fair public auction or in a correctly announced sale process amounts to a federal RICO case that could – and, I think, should – see Schwartz and his fellow board members criminally prosecuted.

Unfortunately, Eric Holder's Justice Department has shown itself unwilling to prosecute many cases that would have been prosecuted 15 or 20 years ago, before George W. Bush set the standard for non-enforcement of laws and regulations.

Will Holder's people get off their collective behinds and prosecute this case?

There is still some hope.

As usual, no board members would talk to the press about what happened at the meeting or after it.

For one, every board member now is either haredi or Modern Orthodox and none have students in East Ramapo's public schools.

The two non-Jewish board members resigned almost two months ago, citing intimidation and dirty tricks by Schwartz and the other Orthodox members of the board.

They will soon be replaced by two new members hand picked by the remaining board members.

The board's short list has seven names on it. One of those is Yossi Gestetner, the haredi PR flack who called East Ramapo parents opposed to the school board's actions "the grandchildren of Hitler."

Another reason the board won't talk to the press is because its Jewish members agreed at the beginning of the year that no one would speak to the press except for board president Daniel Schwartz, who is also an attorney.  According to the Journal News, "board member Eliyahu Solomon referred comment [on this most recent meeting incident] to Schwartz, telling a reporter that board members agreed during an executive session in the beginning of the school year that no one except the president should speak to the media."

Schwartz has never responded to reporters' requests for comment.

Here's the video of Schwartz ending the public meeting early in case you missed it when I posted it yesterday:

After the scandal-plagued haredi-controlled East Ramapo school board again abruptly ended a public meeting early, this time cutting off what was supposed to be time for students to question the board, the board's high-priced attorney shouted and cursed at a local activist. When an honors student passing by tried to intervene, the attorney shouted and cursed at him, as well.