An alleged victim of child sexual abuse at an Australian Jewish summer camp says his abuser was helped by the community to flee Australia for the US to escape prosecution.

A VICTIM of child sexual abuse has come forward in Sydney, claiming that his alleged attacker was spirited away in the early 2000s.

Now in his 20s, the victim was on a youth camp when the assault occurred.

His family reported the incident to the NSW Department of Community Services (DOCS) and to the victim’s school, where the alleged perpetrator was also a teacher.

The AJN has confirmed that the school also reported the incident to DOCS at the time, but the victim, then aged just 12, said he felt let down by the school’s senior leadership and he has no doubt about what happened.

“He [the attacker] left the country within two weeks,” the victim told The AJN this week.

“What warranted him to leave? It’s pretty clear that they have scrambled to get this guy out of the country,”

“You need to notify the police and leave it with them to deal with, rather than putting them on a plane back to America without facing any consequences whatsoever.

“I find it sickening.”

The school denied helping the alleged attacker leave Australia and the organisation that hosted the youth camp said they didn’t know about the incident until they were contacted by The AJN this week.

The victim told The AJN that he came forward to the police recently when he learnt about the federal government’s Royal Commission into Institutional Responses to Child Sexual Abuse.

Manny Waks – founder of Tzedek, an advocacy group for victims and survivors of child sexual abuse within the Jewish community – said it’s pleasing to know that the school contacted DOCS, but said they had a moral responsibility as well.

“It is disappointing that at no stage did the school feel it was appropriate to follow up this case with the most important person – the victim,” Waks said.

“The victim’s welfare should always be the top priority and in this case it seems to have been ­completely disregarded.”

The allegations by the victim came the same week that Organisation of Rabbis of Australasian president Rabbi Moshe Gutnick revealed that 30 years ago a victim contacted him, but he thought it was a hoax.

Rabbi Gutnick said he only realised the truth 18 months ago when the victim came to him, as an adult, and revealed he was the person that made the phone call in the 1980s.

“Needless to say I was in shock. I urged him to contact the authorities and he told me he had already done so as a result of my advocacy in the press,” Rabbi Gutnick said.

He has called on all members of the community to contact the police if they have information relating to child sexual assault.

Any person wishing to come forward with information should contact Bondi detectives on (02) 9365 9650 or the Victorian Police Sexual Offences Unit on (03) 9556 6125. To contact Tzedek, visit www.tzedek.org.au.

The AJN has more child sexual abuse coverage this week that isn't yet online. Here's a screenshot you should be able to read if you click on it to enlarge it: 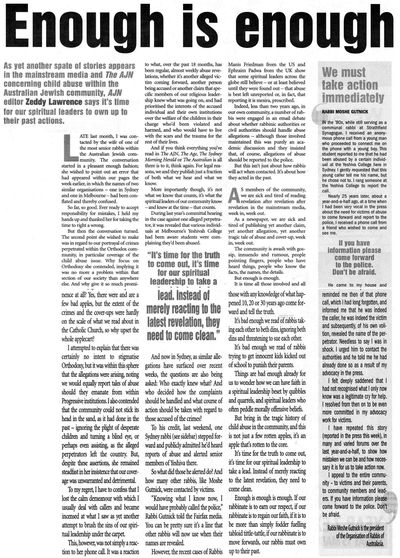 An alleged victim of child sexual abuse at an Australian Jewish summer camp says his abuser was helped by the community to flee Australia for the US to escape prosecution.