« How Did Dov Hikind's Career Survive His Purim Blackface Gaffe? Thuggery And Lies, Say Democrat Insiders | Main | Half Of The Charges Against Rabbi Motti Elon Dropped After Alleged Victim Pressured »

Four Orthodox women from Beit Shemesh have filed suit against the Israeli city for allegedly failing to prevent haredim from dictating so-called modesty rules which they insist must be followed by women in public haredi areas of the city. 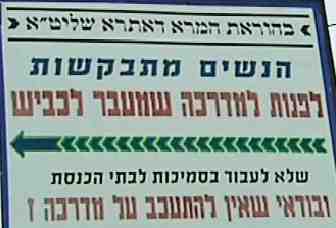 A 2011 Beit Shemesh haredi modesty sign telling women to walk on the opposite side of the street than men.

They’re fed up and they’re not going to take it any more.

Four Orthodox women from Beit Shemesh have filed suit against the Israeli city for allegedly failing to prevent haredim from dictating so-called modesty rules which they insist must be followed by women in public haredi areas of the city, Arutz Sheva reported.

The haredim, most of whom are part of a community that is an outgrowth of Jerusalem’s Mea Shearim neighborhood, posted signs on public property warning that "immodest" women are prohibited to walk in their neighborhood in Beit Shemesh.

When a plaintiff took down one of those signs, she was spotted by a haredi man who allegedly responded by stoning her. "There"s a threatening atmosphere here due to the repeated violence against women who the attackers think are not dressed appropriately," she said.

The women are suing Beit Shemesh for failing to remove the signs. The plaintiffs are also asking 25,000 shekels as compensation for the emotional distress they have suffered because of them.

The Israel Religious Action Center, the Reform movement"s advocacy group in Israel, helped the women file the suit, even though they are Orthodox. The RAC has been involved in several lawsuits related to haredi lawbreaking, including one that caused Israel’s High Court of Justice to ban gender segregation on public buses, and another, not yet resolved, that seeks to make full-time adult yeshiva students ineligible for state welfare payments.

Beit Shemesh has a haredi mayor, Moshe Abutbul, who is a member of the Sefardi haredi Shas political party. He and the city have been sharply criticized for turning a blind eye to haredi violence and extremism, including the refusal to protect grade-school-age Modern Orthodox schoolgirls who were being harassed by haredi adult men in 2011 and early 2012. The girls were chased down the street in front of their school, spat on and called “shiksas” and “whores.”

The city and Abutbul only began to take the problem serious after an exposé on an Israeli television news magazine featured an 8-year-old Modern Orthodox girl who too traumatized by the haredim to walk to and from school without adult protection. The new report caused a sensation across Israel and sparked a massive anti-gender-discrimination rally in the city attended by rank-and-file Israelis from across the country and a few political leaders.

Thousands attended and all segments of Israeli Jewish society were well-represented – except for Beit Shemesh haredim. Only a handful of local haredi turned out, none of them associated with the Mea Shearim sect or local haredi leadership. Abutbul’s solution to the problem of haredi violence was to try to convince the Modern Orthodox school to relocate to a part of Beit Shemesh that did not border on the Mea Shearim community’s ‘turf.’ Past that, Abutbul initially claimed, there really wasn’t anything he or the city could do.

But sharp national and international condemnation prompted Abutbul to take small steps to limit haredi extremism just at it prompted the previously lethargic Israeli police to act to protect the Modern Orthodox schoolgirls.

But as national and international attention faded, haredi modesty signs posted on public property or facing public property were no longer removed by the city, and violent haredim largely went unpunished.

Haredim stoned a woman from Israel’s national lottery, breaking her car windows. They stoned a young non-haredi mother and her baby who had dared to shop in a supermarket that borders on that haredi neighborhood. Supermarkets adjoining that neighborhood suddenly sprouted their own modesty signs, and guard at the front doors not only checked patrons bags for bombs and guns, as is normal throughout the country, but they also allegedly directed non-haredi women to cover their bodies with large black shawls provided by the stores in order to fulfill haredi modesty requirements.

All of this lawbreaking (and more) went largely unpunished, especially after Tzipi Livini was deposed as Kadima Party leader last spring and resigned from Knesset. Without her voice fighting to uphold the High Court of Justice rulings banning enforced public gender segregation by haredim, the ruling was simply not enforced.

Prime Minister Benjamin Netanyahu desperately needs haredi political parties to stay in power. Without them, he is forced to include centrist and left of center parties in his coalition, and he risks losing the prime minister’s office to one of those parties’ leaders. Haredim, however, do not pose this direct risk to Netanyahu because many haredi leaders will not support a haredi candidate for prime minister, meaning that even if his Likud-Beiteinu party was a minority party in a haredi-led coalition, Netanyahu would have a strong chance of remaining prime minister anyway.

(Likud-Beiteinu won 31 seats in January’s national election. The haredi bloc won 19. But the Beiteinu faction could choose to run independently in future elections as it has in past elections, and that could leave Netanyahu’s Likud with fewer seats than a haredi bloc.)

For its part, the City of Beit Shemesh doesn’t believe removing the haredi modesty signs are its responsibility.

"There were multiple efforts to remove the aforementioned signs in coordination with the police. But new signs were put up immediately, and municipal supervisors do not have the power to deal with a situation like that,” a city spokesperson reportedly claimed.

Four Orthodox women from Beit Shemesh have filed suit against the Israeli city for allegedly failing to prevent haredim from dictating so-called modesty rules which they insist must be followed by women in public haredi areas of the city.