Just like Iran. The haredi city Modi'in Illit once paid its own modesty police to harass and spy on so-called dropout youth and now stands accused of knowing that another haredi modesty squad was harassing, beating and even kidnapping dropout youth but doing nothing to stop the reign of terror. 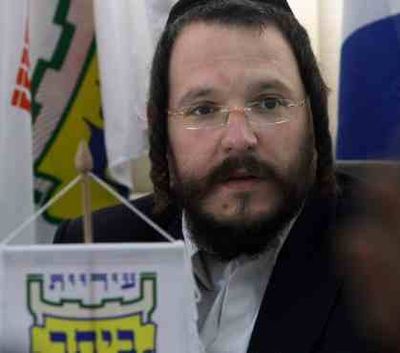 Israel Hayom adds more information about yesterday's arrest of two modesty squad leaders in the haredi city Beitar Illit whose reign of terror included a spate of beatings and at least one kidnapping:

…Beitar Illit Mayor Meir Rubinstein was also questioned in the case, on suspicion of obstruction of justice, fraud and breach of trust. Rubinstein has since been released. …

[Police] investigators learned that the modesty squad would ambush these "dropout youth" at bus stops across the city and search for them in the streets.….

The undercover investigation also revealed that senior city officials were aware of the modesty squad's illegal activities but had turned a blind eye and refrained from taking action against the suspects.

Additional suspects were interrogated in the case and placed under temporary house arrest.

A senior police source said there had also been many complaints in Beitar Illit of a man who verbally assaulted women from his vehicle over immodest dress. In one instance, the man reportedly got into a physical brawl with another man over insults he directed at the latter's wife.

This is not the first time Israel Hayom has reported on illegal modesty squad activity in Beitar Illit. Over a year ago, the Israel Hayom weekend supplement ran a feature on a cell comprised of Beitar Illit men who targeted "spiritual offenders" and "problem youth" — young men and women who deviated from the city's ultra-Orthodox status quo. The treatment of these young men and women, according to firsthand accounts, included physical and verbal violence and harsh threats.

The cell was supported by an organization called the "communities committee of Beitar Illit" which works in conjunction with Mayor Rubinstein. The municipality even allocated resources to fund the modesty cell's patrols and activities in the city.

The activities included, among other things, preventing the mixing of boys and girls and treating "spiritual offenses" on public transportation: immodest dress, offensive music, and failure to observe strict segregation between men and women (which has been ruled illegal by the High Court of Justice).… modesty squad modesty squad modesty squad

Posted at 10:31 AM in Crime, Litigation, etc., Haredim, Israel | Permalink

Just like Iran. The haredi city Modi'in Illit once paid its own modesty police to harass and spy on so-called dropout youth and now stands accused of knowing that another haredi modesty squad was harassing, beating and even kidnapping dropout youth but doing nothing to stop the reign of terror.